I’ve always been a fan of Vivienne Westwood with their quirky edge to all of the lines from the more affordable Anglomania and the collaboration with Lee to the higher end Vivienne Westwood Man and Gold Label lines.

I mainly do most of my clothes shopping online due to the lack of any decent fashion shops in Cardiff over the past few years since the closer of my favourite store The Wardrobe and the Chessman shops too but Cardiff is starting to pick up again over the past year. St Davids 2 has slowly been tempting in not only some good fashion retailers but my other passion food is also on the up with the recently opened Wahaca and the immanent grant opening of Burger and Lobster so I’ve had a few trips into the capitol for a browse recently instead of relying on online retailers such as John Anthony, Selfridges and Harvey Nicholls.

One of my pet hates of shopping online is finding something to fit as my body is constantly fluctuating in shape and weight with me hitting Crossfit hard some months then having a bit of a break to rest the muscles. I find it a nightmare to find something to fit me in both length being the short arse I am and on my arms and shoulders especially shirts and polos as the shorter the top the smaller they are on the arms and around the chest. There’s nothing worse than feeling uncomfortable the later on in to the night when you have more to drink and the belly starts to bloat!

One thing i really hate is when you can never guess what size your going to be in the same brand of clothing as i can be anywhere between a small and a large in some brands, which is ridiculous when you have to pay every time you want something delivered, again to send it back and a third time if you want a different size.

Vivienne Westwood being my favourite brand at the moment have made my life a bit easier with the opening of the store in St Davids 2. Even though I like to shop around to get a good deal on my clothes it is handy to try things on in store then try to find the best price online for it if they don’t have it on sale that day in the Cardiff Vivienne Westwood store.

I’ve got about 4 or 5 of the standard Vivienne Westwood polo’s now so trying to find something different to wear as i’m sick of being seen in the same look for the past year.   I’ve also put a bit of bulk on around the shoulders and chest so my current purchases are looking a bit snug in a medium and think i need to upgrade to a a large for future purchases. 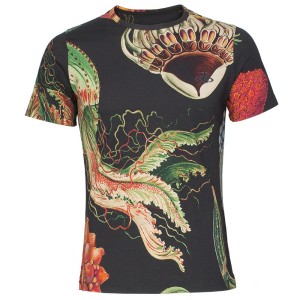 My most recent purchase and one which i had wanted for some time but wasn’t willing to pay full price was the Vivienne Westwood Sea Creatures Graphic Tee. I managed to find it on sale online and decided to get to take with me on my recent trip to Amsterdam, as i thought it was rather fitting with the psychedelic colouring and floating jellyfish. Vivienne Westwood have used the sea creatures graphics on a number of items this season including the graphic tee, denim jacket, jeans and hoodie. You can get the sea creatures tee on Flannels at the moment. 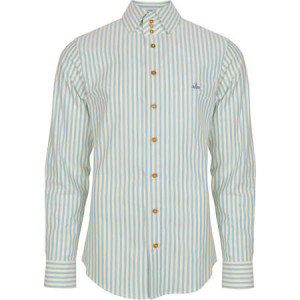 see any new arrivals and tried on a really nice Vivienne Westwood MAN Delhi Stripe Fitted Krall Shirt in Aqua/Yellow. I tried a medium on, which i really liked the close fitting all around but there wasn’t much room in the chest and didn’t leave much give for over Christmas as I managed to put half a stone in weight on last year. I tried the large on, which did look nice but didn’t feel as fitted everywhere else like the medium. The shirt was around £280 in store so even thought it was a really nice shirt i was putting that back on the shelf until a sale starts just before or after Christmas. You can get it online at the moment at Garment Quarter, one of my favourite stores in Bristol who also happen to own the Vivienne Westwood Cardiff store.

I’ve never been too keen on the Vivienne Westwood Pirate boots to be honest but noticed the trainers when i was in the Cardiff store and thought they didn’t look to bad. I’m on the hunt for a new pair of trainers as my Puma Alexander Mcqueen high tops have seen better days so i’ve been scouting out reasonable price for them online since i got home. The low profile trainers seem to be around the £270 mark and around £320 for the high tops with both sizes available in black or brown. The current price is a bit over my usual budget for trainers so again i will be waiting to see how much they go down to in the Christmas and January sales. You can find both the low and high top Vivienne Westwood trainers in black or brown on the Triads website. 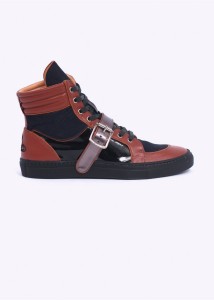 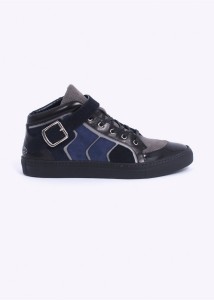 Best tees from Asos this Easter

This is not clothing collection II/II graphic tee
0 replies

Maritime inspired Miansai bracelets with hook and anchors in leather and ro...
Scroll to top