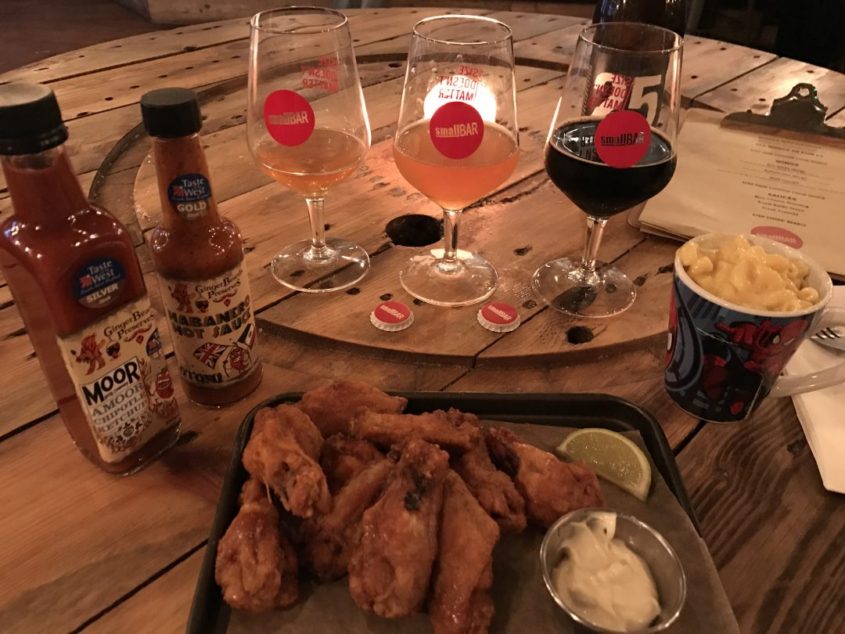 I’ve wanted to try the wings at Wing Wednesday at Small Bar in Cardiff for the past few weeks after seeing a post on facebook but i’ve had things on and haven’t had chance.

As i was left to fend for myself for a few days and the thought of eating the fish i’d pulled out to defrost in the morning when i got home from work compared to the mound of greasy, golden crumbed morsels of spiced chicken and a beer flight of ipa, sour beer and stout left me weeping ever so slightly inside.

I’d done the Crossfit Open 17.3 on Monday then something that never happens these days a 2nd visit to Crossfit in two days so my arms felt like they were falling off and needing some energy. I don’t quite think I had the energy to turn the oven on, throw two fillets of cod on a tray and stuff it in the oven after squat snatches, chest to bar pull ups, toes to bar, burpees and double unders thrown at me the previous two nights so Wing Wendnesday it was for me!

So what is wing Wednesday? Basically you get 10 wings in a choice of 3 flavours from sticky caramel and chilli, buffalo hot wings or the “Holy Cluck” which were slathered in Gingerbeards Hot Habanero sauce. You then get to choose from a choice of blue cheese dressing, roast garlic mayo or fresh tzatziki on the side.

I was hoping I could do half of one and half of another flavour as I fancied trying the hottest ones on the menu but unfortunately you had to have all the same flavour. I opted for the sticky caramel and chilli with a pot of garlic mayo as I thought I would just use the chicken as a vessel to mop up the sauces. I also realised that they had bottles of chiptole ketchup and the hot habanero sauce near the cutlery anyway so really I got to try them anyhow.

I was under no illusions that this wouldn’t fill me up so it would of been rude not to order a side of mac n cheese for an added bit of carbs to help fend off the hunger pans till bed time.

There were a couple of people who ordered before me so there was a slight wait but nothing too drastic it was probably just the fact I was sat there with my beer flight like billy no mates that time just seemed to slow down.

So the wings arrived accompanied by a spiderman mug filled with the creamy mac n cheese, which was a nice touch. The first thing i noticed about the wings was that the sticky wings were not so sticky wings. I think they forgot to add the caramel and chilli glaze as they were bone dry but I’d poured a liberal helping of the chiptole ketchup and the hot habanero sauce,teamed with the pot of garlic mayo on my tray ready to slap with my crispy chicken wings.

I think the mild flavour choice was a good call as a plate full of the hot habanero would of overpowered everything and with the dip on the side you can apply to your taste it was just a shame my chicken didn’t seem to have the caramel and chilli glaze making them sticky as I think they must of forgoten about it before plating up. Never the less the chicken was morishly addictive with a smudge of garlic mayo then alternating swipes of the chiptole and habanero sauce with each bite.

The mac n cheese was something else too. Creamy and strong cheesey taste with a kick of mustard lingering on in the mouth after each mouthful I didn’t want the mug to end. It would of been 10/10 with a sprinkle of crispy bacon nuggets on top mind but were delicious without.

It did fill a hole although the glutenous me inside had wished i’d ordered the chilli cheese fries just to try too but I was eating alone and that would of just been greedy!

It’s a thumbs up from me for Wing Wednesday from me at Small Bar and can see me popping in again sometime soon on a Wednesday and this time I’ll get to try the chilli cheese fries too. A bit dissapointed my chicken didn’t arrive as I’d pictured based on the description as they were supposed to be sticky wings and were missing the glaze I would of expected but the Gingerbeards sauces available with the condiments made up for it. Mac and cheese was spot on but as mentioned earlier a bit of crispy bacon or something greazy and crunchy on top would of taken it to the next level.

My good friend Dewi working behind the bar is always on hand to offer some well informed recomendations about what’s on tap on the day and also informed me there is 2 for 1 on pizzas on Mondays. Having sampled the spizy pork calzone the last time I was in I’ll definitely be sampling a pizza there some time soon.

The beer flight deal they have on at Small Bar is always worth a punt too as £7.50 gets you 5 x 1/3 pints of anything 7% and under. But fear not you crazy beer guzzling lunatics, you can top up a £1 per drink for anything over 7% so you can still sample something under the Crazy Shit options on the menu. It’s now my go to option whenever I’m there now as I get to sample so many different drinks in one sitting plus it works out miles cheaper too. I love that they always have a sour beer or two on the go at any one time too as it’s my new favourite tipple.

Saying that the 13% 3 bean stout I sampled in my flight was such a good drink. Some of the stouts and porters on the higher end of the abv scale tend to be so intense they’re unpalatable but this one from Lervig had so many levels of flavour with coffee and vanilla notes coming through.It was so satisfying and a great drink to end on especially as I hadn’t ordered dessert.