Eating reasonably healthy all week usually requires me to keep sane by overindulging on the weekend and I haven’t done bad this weekend with my experimenting with burger combinations and sides on Thursday, 3 course carb fest at Maenllwydd Inn down Rudry last night ending in groey caramely heaven on a plate that was cinder toffee cheesecake that i still haven’t been able to rid my mouth nor do i want to of a film of velvety caramel.

I opted to stay in tonight on a Saturday in aid of my non existent Ibiza fund for September, which could only mean one thing…something indulgent to perk me up seeing that i won’t be venturing out for a pint of fermented apples tonight. Nothing took my fancy in Marksy’s earlier although it is Ponty and they don’t have a wide selection and it was even two can dine for £10 but they only had one dessert left and it looked garbage so headed off to Sainsbury’s to see what they had to offer my sugar craving.

I’d only stepped off the escalator and was met by a shelf taller than me (not hard with my 5ft 9.5″ on a good day stance) full to the brim of meringue nests strategically aligned with the plummets of strawberries. SOLD!! My favourite dessert in the world ever it was going to be and after receiving my picnic hamper thoughtfully stocked with 2 bottles of Pimms from my competition win with Pimms on their twitter page a few weeks ago I wanted to marry the two together in a dessert for the first time. How better than making a coulis for the Eton Mess with the help of my freshly won Pimms.

I meandered around the aisles looking for the other must have accompaniment to an Eton Mess, which is cream. I pondered over trying creme freche for a change or for some split second mental idea of having something healthy in my bowl with Greek Yogurt then I had a tub of Sainsbury’s Taste the Difference Madagascan Vanilla Cream BINGO!

I wasn’t feeling overly fussy on main course as i’ve been pretty wrecked this week after starting a new job getting up half hour early every morning and travelling 5 times the distance so Spicy Beef Pizza with a side of jalepeno cheese poppers would do tonight.

To start the Ultimate Eton Mess chop half the strawberry’s up into small chunks as I don’t have a blender, add a dessert spoon of caster sugar and the juice of the lime into a saucepan and put on a low-medium heat giving it a stir for a minute. Add the chopped strawberry’s mixing up all the ingredients and leave to heat up and letting the lime and heat break down the juices in the strawberry’s. After 2 minutes I added a double shot of Pimms to the saucepan and put on full heat to bring to boil and let it bubble for a minute to thicken the coulis then turned off the heat to let it cool.

I put my pizza on and enjoyed that with one of the pale ale’s i still had left from my recent Beer52 delivery whilst the coulis cooled down.

I quartered 4 strawberry’s broke up one meringue nest into my bowl, added a dollop of the vanilla cream, half the strawberry’s and drizzled with the coulis then repeated with the 2nd meringue basket, another dollop of cream, the rest of the strawberry’s and a generous drizzle of the Pimms coulis. I have a mint plant growing in the garden so i decorated with some newly sprouted tiny mint leaves and a small dusting of icing sugar because it wasn’t possibly sweet enough already ha ha

Take one big spoon and don’t come up for air till it’s gone! 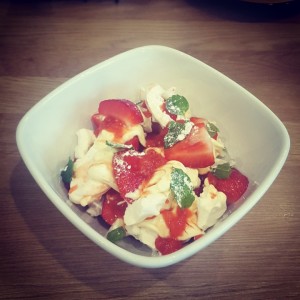