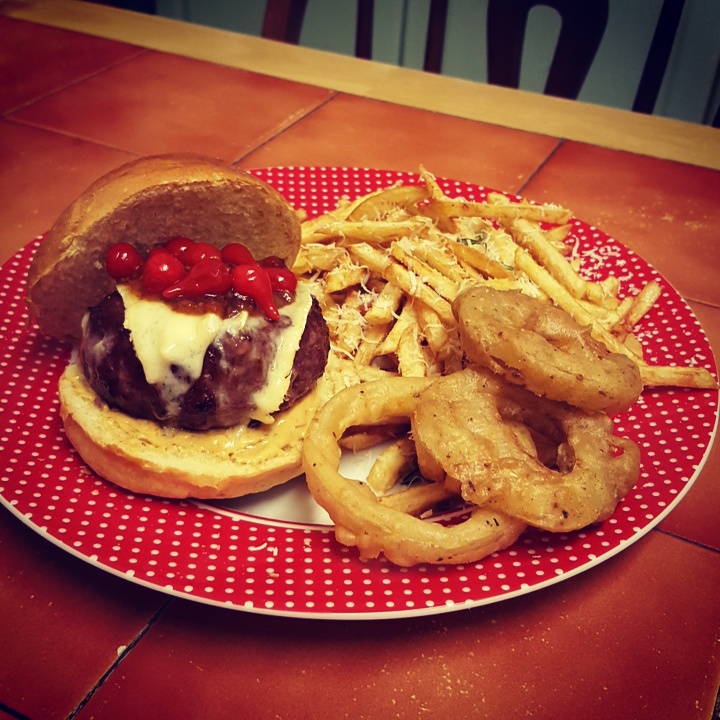 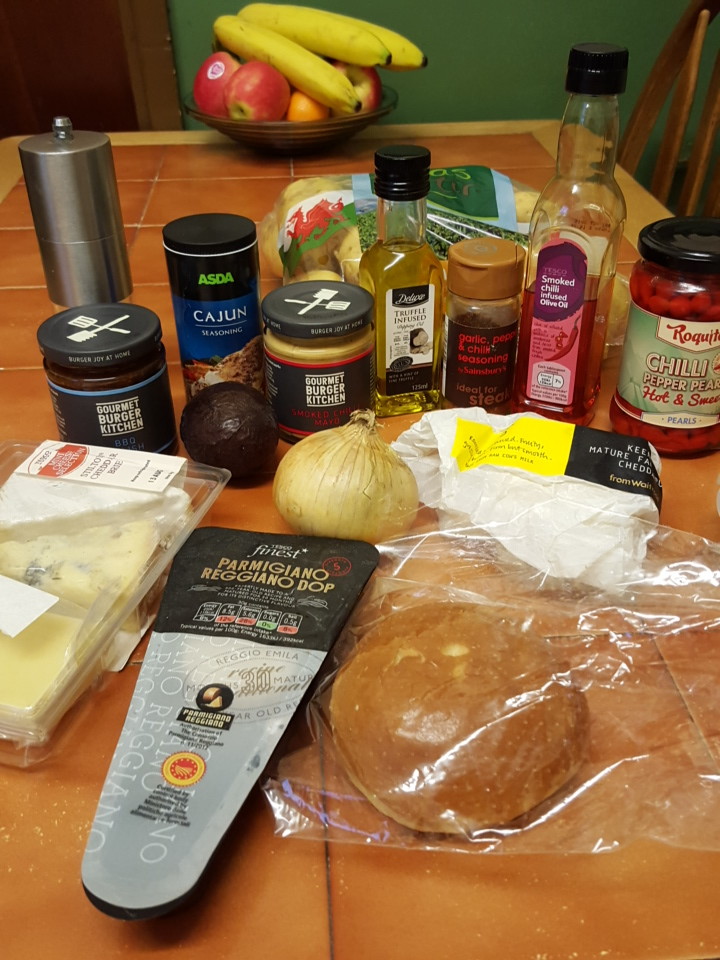 I’ve had a bit of a burger obsession the past 12 months with the relentless hammering down my throat with them at all the local street food festivals and burger joints showing up in Cardiff at the moment and I like to play around with some flavours and combinations at home trying to find the Holy Grail of combo’s and because I would really like to run a pop up burger joint at my grandparent’s pub some time in the near future so I need to build my potential menu offerings in the mean time.

I alway’s make my own burgers and still feeding off the 50/50 burgers half beef and half smoked streaky bacon I made a few weeks ago and froze but i’d picked up some condemned (yellow stickies for close to sell by date, my favourite past time on the way home from crossfit finding some bargains for work and to stock the freezer) Welsh Steak burgers a while back and had them gathering ice in the freezer so I thought i’d do them as they are some beastly meat offerings and thick as hell. I’m sick of having plastic chips and french fries and being charged £5 for a small portion just because there’s some parmesan sprinkled on top in food festivals so thought i’d hand cut my own to attempt frying to see how different they turn out and whilst i was there attempt my first batch of deep fried sweet potato.

I cut 3 Maris Piper Potatoes up as thin as i could whilst my burgers were in the oven and set aside. Then I decided I was going the full hog and making some fresh onion rings but not just any old onion rings i was making two kinds. I had a shaker with garlic, chilli and pepper so that was going in the one batter mix which was just a couple of spoonfuls of self raising flour mixed with a bit of water little by little until you got your desired thickness i wanted it thick to stick to the onions. I mixed a generous sprinkle of the spice mix and then made a 2nd bowl of batter only a small bit as i was only cooking for myself and using one onion and then added a sprinkle of cajun seasoning to the mix for a different flavour.

Cut the tops and bottom off the onion then in half so the top and bottom are still in the middle of the halves than cut your rings of onions to your desired thicknes i probably got 3 out of each side then take out the middle bit of the onion leaving just the rings and i then split each one into two rings so they weren’t too thick they wouldn’t cook properly.

Coat half in one mix and one in the other but you can just use a plain batter or attempt something else if you fancy go nuts! I dropped the onion rings in one by one dipping it in slowly first before dropping so it didn’t stick to the bottom of the basket. Cook for about 5-10 minutes depending on thickness of the onion and the batter until you get your desired crispiness at around 160C to start then a minute on 180C to crisp up although i put mine in to finish off and keep warm wile i cooked my shoestring french fries cut by hand.

Before I put my fries on i added a slice of brie over my burger in the oven to melt. Drop the fries in the fryer and cook to your desired browness or crunchiness again i cooked mine for around 5 mins on 160 as they were quite thin and blasted them for a minute on 180C too to crisp up.

I cut my brioche bun, and added a slather of my GBK smoked chilli mayo that i’d bought along with habanero chilli jam, harrissa mayo and bbq relish as they were all half price and just £1 in Tesco this week. Then i added the brie encrusted Welsh Steak Burger, topped with the GBK BBQ relish and dropped a few Chilli Pears that I also stumbled upon in Tesco that were spicy but added a sweetness to the mix.

Next I stacked my plate with the fresh french fries, grated a good helping of Parmesan Cheese on top and plonked a few of the different onion rings where there was space not for them to fall off. I was going to have posh fries with the parmesan and truffle oil but the truffle would of overpowered everything else on the plate and I was even going to attempt a double burger as I had cheddar bubbling away on top but the size of the burgers is unreal there was no way it was all fitting in even my greedy gob with two in the bun so I offloaded that off to my eager waiting grandfather.

The burger was served slightly pink as it was frozen it needed a bit longer but it was just right and how i’d of expected it at any decent burger restaurant so i was happy and haven’t died 3 days later.