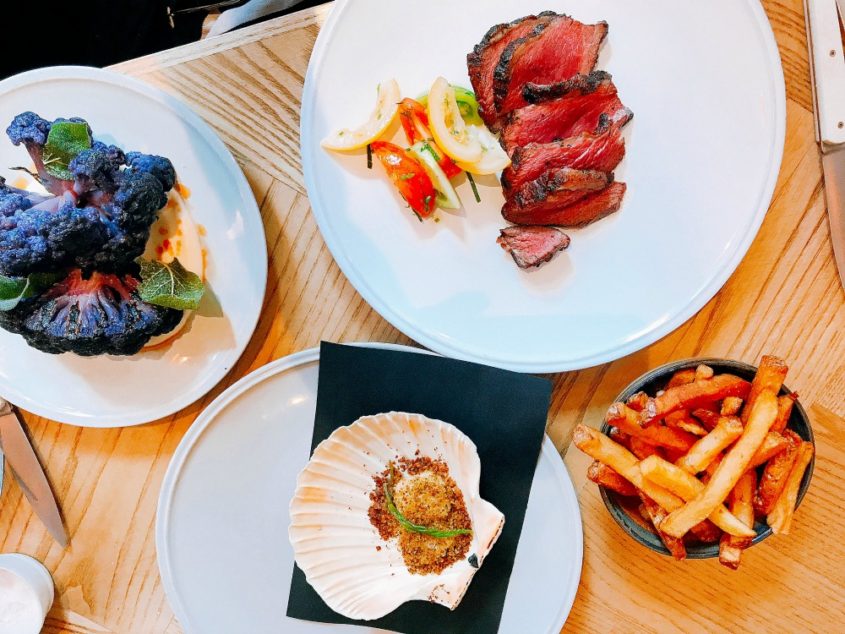 So after trying the eagerly awaited opening of Asador 44 for my birthday back in April for the evening menu and having our first taste of Old Cow, the revered Rubia Gallega aka Gallician Blond we have been meaning to come back to compare against the lunch time menu. Thankfully the lunchtime menu offer features Picanha steak and fries for just £10, which was a welcome relief as I don’t think I could ever justify an £80 steak for lunch.

It just so happened I’d booked two days off for Mwsh’s birthday so it seemed the perfect opportunity instead of going for our normal breakfast outing on a day off and we’d had a few the past few days having camped on Flat Holm Island then stayed the night at Holm house in the 2 days prior.

I told myself I was only going to order the £10 lunch deal on the menu but that was never going to happen really after seeing the standard menu peaking up behind the smaller lunch menu offerings.

There were four options for the £10 lunch menu

They also do the following childrens menu for lunch:

I did fancy the fish option but had seabass the day before for lunch at Holm House so it was steak option for me cooked medium rare. 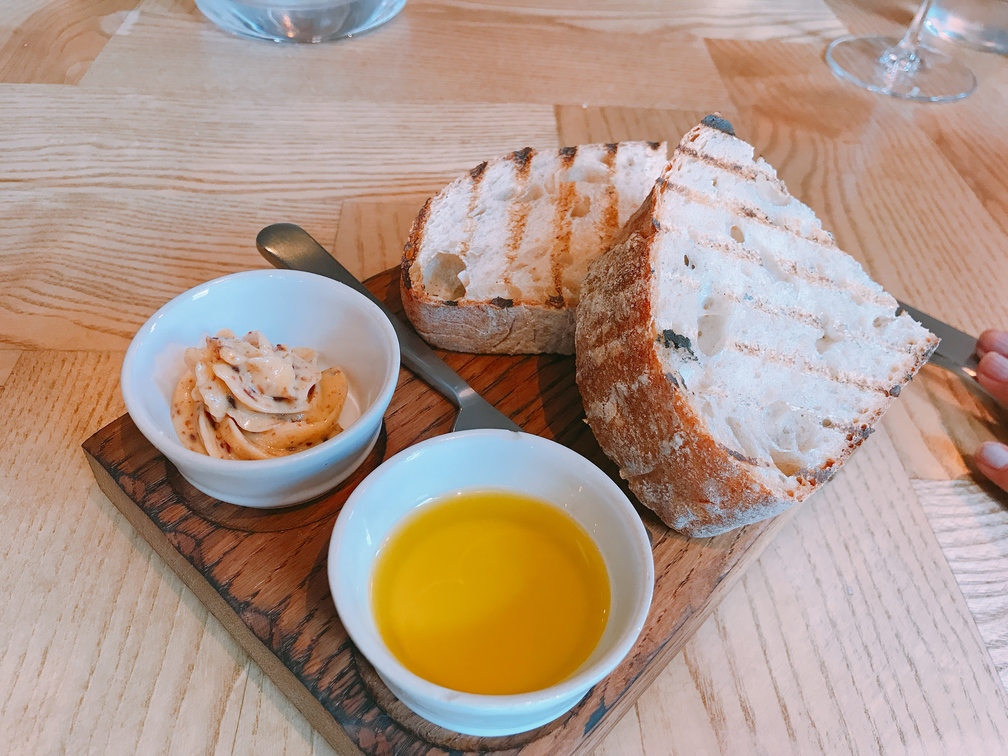 As I wasn’t sure what the portion size was going to be like for the price I thought I’d throw in some house made chared breads with the jamon butter and oil to nibble as we waited. I loved it last time with the little meaty nuggets of cured ham mixed into soft butter allowing you to actually spread or dip into the bread without masacring the doughy chunks unlike some restaurants who think it’s acceptable to store their butter in what seems to be liquid nitrogen sometimes. Sorry just a pet hate of mine frozen butter, just why!

Not one to pass off scallops on a menu they offered them by the portion baked with breadcrumbs and samphire so I just went for the one to turn my steak dish into a surf and turf. Thinking it might be an idea to eat my first vegetable in four days I went for a side of spiced charcoal cauliflower too and pot of the Romesco sauce as I can’t eat my fries without something to dip them in and I daren’t ask for ketchup at this joint i think i’d be barred for life. 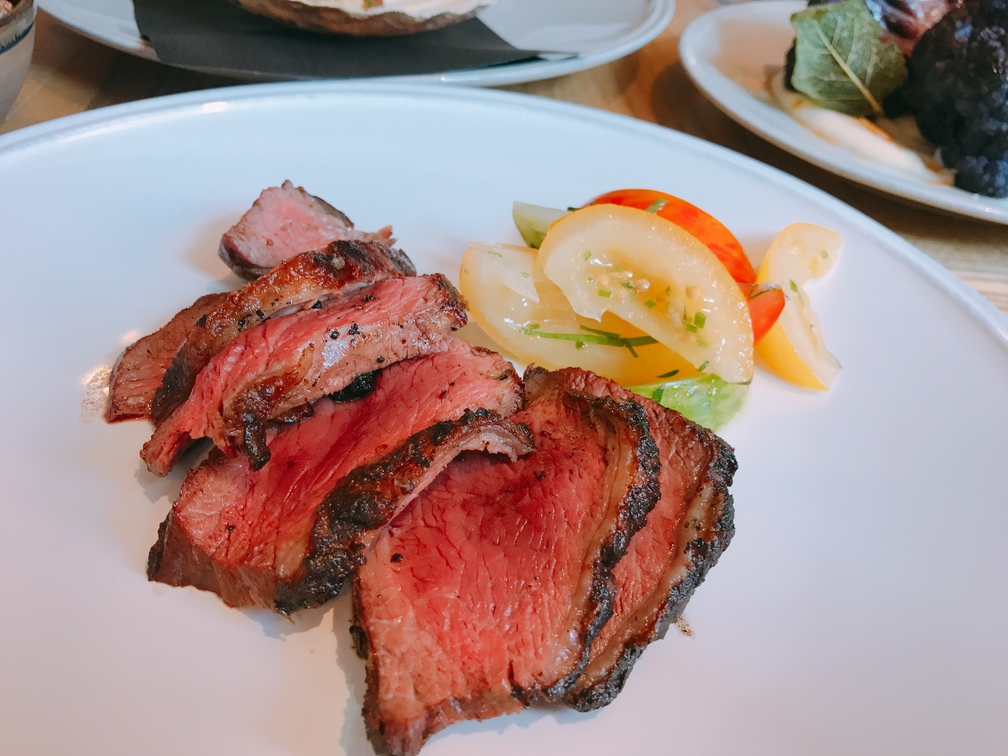 We both ordered our steaks medium rare with Mwsh snatching the first plate that came out that was a perfect medium rare whereas mine bordered more along the medium end of the scale although this wasn’t too much of an issue as it was perfectly pink and succulent. I love the charred, bbq effect the Parilla grill has on the steak crisping it up yet locking and sealing in all the juice and flavour.

The romesco sauce was ok to dip the skin on fries in but as we asked the waiter what was in it and the word chilli was in there I was hoping for something a bit spicier. It was an ok dip but we tried the peppercorn and the rijoca and bone marrow last time and it didn’t quite live up to those tasty numbers.

The spiced charcoal cauliflower was a good sized portion with a whole head of purple cauliflower slightly chared in the centre atop a creamy mayo like sauce. I’d only ever seen a purple cauliflower the day before in a fruit and veg shop in Penarth and was going to buy one for my nan for a Sunday roast or cauliflower cheese on the way back to the car but the heavens opened and had to make a run for it shortly afterwards.

The dish here was fine, I like anything with a bit of char on it from a grill and the sauce gave an extra hit of flavour but I couldn’t work out where the spiced bit of the dish came in as that wasn’t coming through for me so it could of done with a bit more of the spice they added for my liking. Last but not least the scallop came baked in it’s shell with a breadcrumb topping. It said baked with sampire although I only had one little sprig on my shell. The star of the dish though was the scallop though so I wasn’t too worried about a bit of greenery on the side. Soft and tender with added texture from the breadcrumb it did exactly what I was expecting. I only opted for the one so you can control the portion size depending on how hungry or how big your wallet is.

All in all I was very impressed, in fact I’d go as far as saying I enjoyed this visit more than the first as it was a more casual affair and the price was excellent value for money. We paid £45, which included £5 each for a glass of wine with the lunch, which wasn’t too far off 1/4 of the price we paid in the evening. Ok you don’t get the Gallician Blond here but the Picanha and fries on the evening menu comes in at £22 but was a steal at £10 for lunch.

I’d like to try one of the fish and chips options on my next visit for lunch but I’d highly recommend the steak on the lunch menu for the price. Ok you have to buy a drink but the £10 for steak and chips is probably the best lunch deal in town considering the quality of the beef being used and not some laser cut piece of gristle you might get from other restaurants for around the £10 mark.