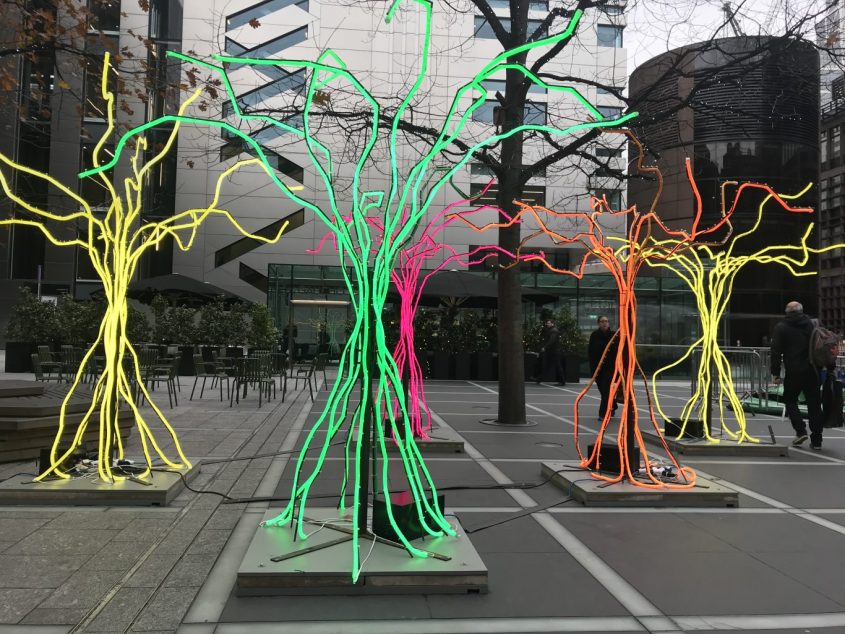 So I was up in London for some Microsoft Dynamics CRM training for a few days not long ago near the city in Broadgate London. Usually one to rustle something up the night before when in Cardiff I was a bit worried about having to live off sandwiches for 3 days especially on my £5 allowance with work.

I didn’t do any prior planning due to being with 4 other work colleagues and not knowing what everyone would like I just had a quick scout on google to find places to eat near the office and up popped HOP Vietnamese and I was sold. I bloody love a Bhan Mi so I said to everyone else you can go where you want but I my friends am going for a Vietnamese. To my surprise everyone else seemed game too.

Turns out Hop Vietnamese was located within the courtyard of some office blocks named Finsbury Avenue Square and it had a load of other street food vendors to choose from. 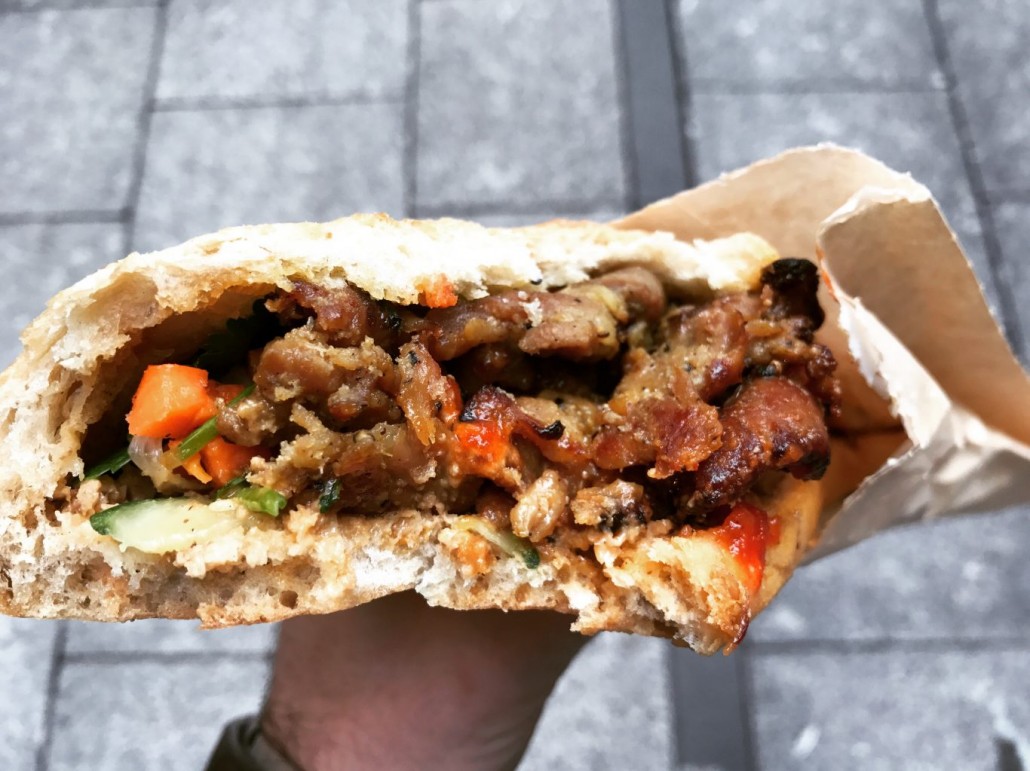 I had my first taste of Bhan Mi, the biggest street food export to hit UK shores from Vietnam at Bombers in Cardiff and I was a big fan. So much so I attempted my own Bahn Mi a few days later. Not specialising in Vietnamese cuisine in Bombers I was keen to try something a bit more authentic and Hop didn’t disappoint.

The place was absolutely rammed come lunch time, which is always a good sign. There were a few options to choose from such as protein vegetable salads served cold form the fridge included mung bean boodles, fresh veggies and choice of meat and sauce.

Hot boxes seemed popular and contained rice, shredded salad with various meats and sauces too but looked a bit more appetising that the cold noodle boxes as they smelt amazing.

There was only one thing on top of my list though the Chargrilled pork and pate Bahn Mi, which also came in a crusty baguette filled with fresh herbs, mayo, onion, cucumber, spring onion, pickled veg, chilli. Two the other guys ordered the same as they didn’t have a clue what to get and their faces said it all chomping on their first bite. This beat any other Bahn Mi including mine. Crusty bread paired beautifully with the slightly charred pork with fragrant spicy and herbilicous kick. For £6.95 I thought it was an absolute bargain especially for Central London. So after wiping the crumbs out of my beard from the Bahn Mi at Hop Vietnamese I went on the scout to see what other array of goodies were dotted around the square for subsequent days. One such unit was Claw, specialising in Mac n Cheese with a few seafood numbers thrown in for good measure.

Day 2 then was mac n cheese day but I wanted to go one better. They did a crab mac n cheese on the menu and a lobster salad so I thought I’d go off piste and the guys at Claw were happy to oblige with a little premium added on top for lobster mac n cheese.

The pot wasn’t huge, but they probably cater for the London appetite who can probably barely afford to eat with the spiralling house prices. I’d been hoping they would answer my request all morning after seeing the menu the day before and was glad I tried it but it could of done with being a bit warmer and a bit more cheese in the mix to make it a bit richer (if that’s possible with a dollop of lobster. Priced a bit more than my normal lunch at £9 for the lobster mac and just over £10 with a drink but it’s not everyday you see this on the menu. 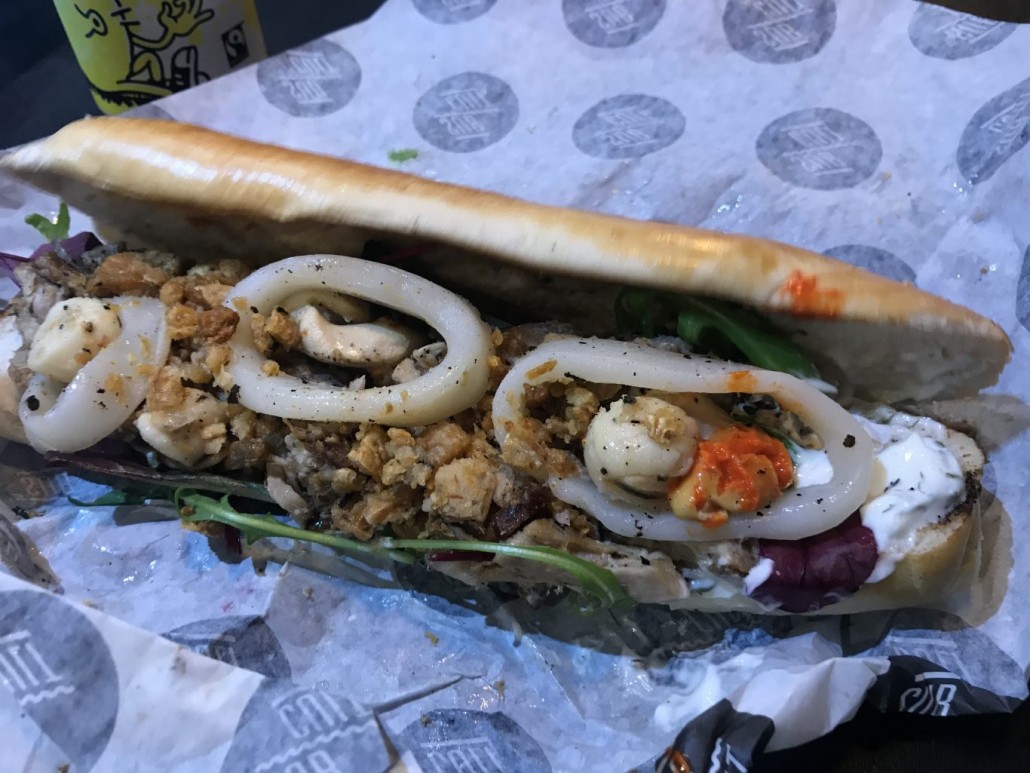 So I walked past this place the previous two days but didn’t have chance to take a glimpse of the menu. I’d tried to grab a duck bun from Yolk, which was basically next door for two days but the first day they’d sold out and my last day in the big smoke they didn’t start lunch till 11.30 and it was only 11.

Luckily for me I did get a chance to sample what the guys at Sub Cult had to offer. Seeing as it was my last day i thought I’d go balls out and opted for the award winning submarine club. Basically what looked like a random mix of some of my favourite dishes, stuffed into a manageable carb based shipping vessel. I wasn’t sure at first but I was a convert after finishing the last couple of scraps of the pork, crackling, scallops, calamari, rocket and lemon mayo. This came in around £9 but varies on market price for the seafood.

Other options looked pretty tasty too such as the rodeo consisting of rare roast beef, truffle may, grana padano shallot jam, pickled serrano chilli priced at reasonable £6.95 considering the £6-8 price on a sub at New York Deli in Cardiff. You do need to be super human to finish some of those in one go mind but for London it’s a bargain.

As mentioned I’d attempted to grab a duck bap for two days , which also included pulled confit duck, crispy duck skin, smoked aioli, caramelised balsamic onion in demi brioche bun but it just wasn’t too be. This was priced at £7.50. There were a few other numbers temping me on the menu but so little time unfortunately.

Specialising in Bhangra burgers and tandoor grill. I didn’t get round to trying this out but the burgers sounded superb. My colleague did manage to try one although he opted out of the nagga chilli double burger. I probably wouldn’t of wanted to sit in the afternoon training session dripping with sweat and snot either mind saying that.

If you’re around Broadgate with work or just in the area and looking for lunch, you have to go try out some of the traders lunchtime. I can guarantee you won’t be disappointed, well you might be disappointed you’re not there for longer than 3 days to go through them all like i was.