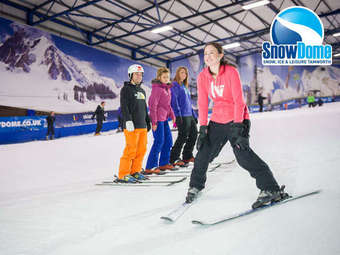 I’ve never been skiing or snowboarding but recently booked my first trip on the slopes to Andorra in March. As I don’t skate or surf I don’t quite fancy my chances of taking to it like a duck to water i’ll be honest so i’ve been toying with the idea of getting a lesson or just trying open session at a local dry ski slope in Cwmbran or Cardiff. I’d heard there was an indoor ski slope in Birmingham but I was also told that the price was a bit steep and after spending a little more than I first anticipated on new kit for the snowboarding trip I ruled that option out.

Luckily I just stumbled on a great discount at the SnowDome for an indoor ski or snowboarding lesson for a fraction of the normal cost of lessons there. LivingSocial are offering a 2 hour group ski or snowboarding lesson for a discount price of just £37 instead of £62 per lesson as advertised on the SnowDome indoor ski slope website. This doesn’t give me much time to book as it’s a bit late this weekend, which only leaves next weekend to take advantage of the SnowDome discount snowboarding deal as i’m flying out on 13th March but if I do enjoy the slopes i’ll definitely be heading back up to Birmingham for a lesson when i get back.

If you’ve never given skiing or snowboarding a try or want a bit of help before your first trip on the slopes then this indoor skiing or snowboarding discount at SnowDome in Birmingham is definitely worth considering as friends of mine pointed out that i will end up wasting a day of my trip sitting on my ass as i won’t have a clue what i’m doing. Seeing that i’m only going for 4 days that seems a bit of a waste so even if i don’t have time to travel up to Birmingham’s Snow Dome to take advantage of the deal i’ll try my best to do a dry slope nearby but this is a great idea if you are thinking you are going to end up struggling when you get on the snow.

Take a look on LivingSocial and get the discount indoor snowboarding at SnowDome in Tamworth, Birmingham with either 2 hours for £37 or a 3 hour lesson for £52 and you get to test your balance and skills right up till August 28th 2015 so you can get a bit more use out of that newly acquired ski or snowboarding kit.

Pie Minister discount voucher for 2 in Cardiff with Living Social