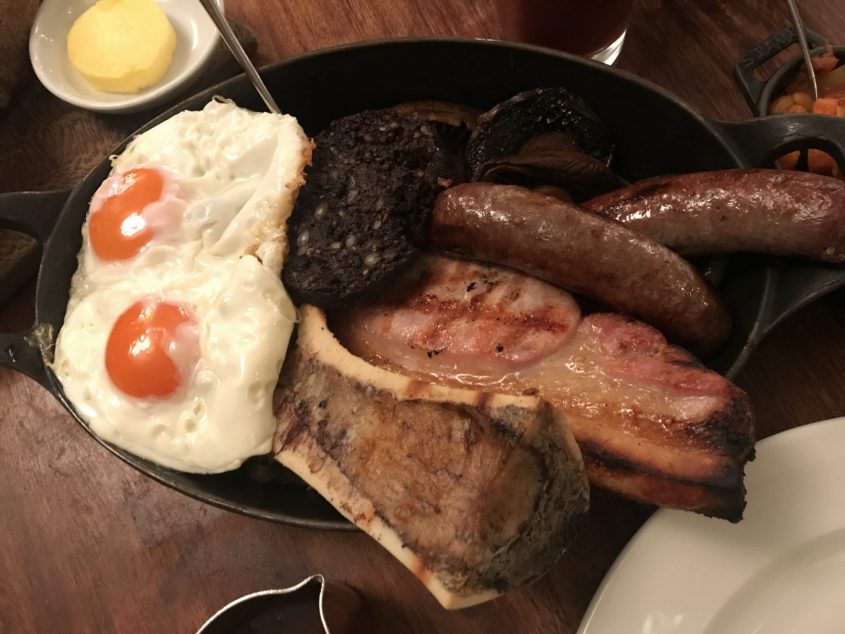 I’ve been dying to try the Hawksmoor breakfast for about 2 years now after seeing a pic on I think it was the Mr Hyde newsletter about the best breakfasts in the big smoke.

Hawksmoor if you’ve not had the chance to visit is a chain of Steak Houses and cocktail bars originating in Spitafields in London and named after the 17th century English Baroque Architect Christopher Hawksmoor. He happened to design the epic Christ Church around the corner from the first restaurant in Spitafields.

Their steaks are now legendary in London and afar but one of their venues tucked away in the cities banking district of Guildhall opens up early not for steak but a gargantuan breakfast platter for discerning ravished diners.

Ok so they do the usual too but I only had eyes for one dish (maybe two) and that was the sharing breakfast. Sadly the restaurant is only open Monday to Friday and stops serving breakfast around 10.30am and I only usually venture up to London on the weekend, hence the delay in getting my greedy chops through the door.

I decided to bite the bullet, travel up and book a hotel in London just so I could end this constant inner yearning for the early morning meat fest. Staying around the corner from Tower Bridge we decided to add a bit more excitement to the trip to the Hawksmoor Guildhall and have top gear esque battle across London (well all 1.5 miles) through rush hour with me on foot and Llio via London cabbies arch nemesis Uber. Armed with a fully charged iPhone and google maps at the ready we both said our farewells at the exit to the hotel and headed our separate ways in search of the restaurant.

Being a total stranger to this neck of the woods in London I was totally reliant on the power of google and if you’ve ever had the pleasure of finding somewhere whilst on foot you will know too well how much of a pain in the ass it is changing arrow direction in a heart beat and sending you around in circles.

Anyway 20 odd minutes later my power walk had turned to a limp from unbroken in Chelsea boots and sounding like I’d smoked 20 wood bines before leaving the hotel I was close to the X on the map. No sight of Llio and no expectant sign outside a building I seemed to walk past my intended finish point. I circled back, checking the walls for hidden clues to the venue where I saw the other half toddling up the bottom of the street. I was adamant I’d do a Topgear favourite walking into the bar thinking I’d won whilst Clarkson peers out over a newspaper with his drink so I was quite impressed my lard arse had steam rolled through the masses quicker than the pristine pimped out Mercedes.

After a bit of ribbing and boasting about my triumph over man vs technology the we headed down into the bowels of the restaurant in the basement. The décor was classic gentleman’s club with panelled wood walls, burgundy leathered seats emanating ever so slightly more style than my much acquainted weathered greasy spoon or Wetherspoons for that matter that I’ve had to resort to, to satisfy my lusting for fried and griddled porky favourites.

Being around 9am there were only one or two other tables taken as most of the usual clientele were now busy behind their desks punching numbers. I didn’t need long with the menu, having digested every ingredient from each course in my brain over the two longs years I’ve had to wait. This was the only time a lobster benedict was going to be outshone on a breakfast menu. 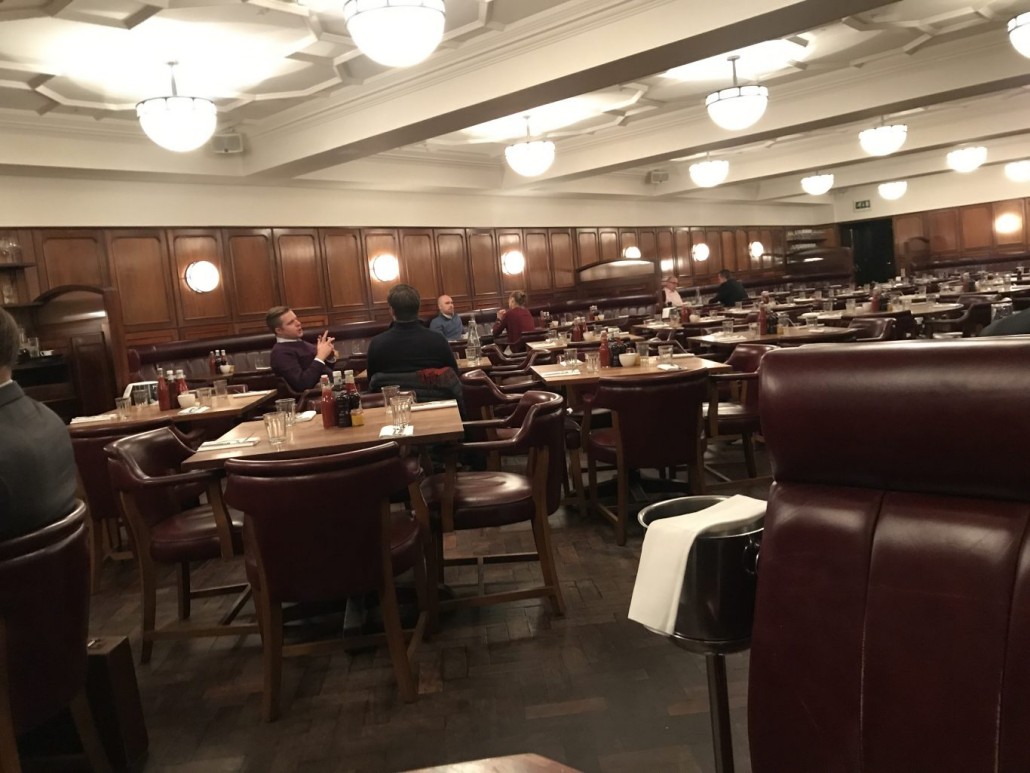 I was in little deliberation about what to order although I was still unsure if I could bare to part with half the sharing breakfast. I waned to temptation and we ordered the breakfast for two, which comprised of:

Just in case that wasn’t enough and because I didn’t know when I’d be in the vicinity on a midweek morning I went full greedy bastard and ordered a side of lobster benedict.

Seeing as it was now gone 9am and a reasonable time to start on the alcohol I opted for the Bloody Mary No.7 from the Anti-fogmatics menu, which in American Folklore it was said a dram of liquor in the morning would ward off the effects of fog and dampness. 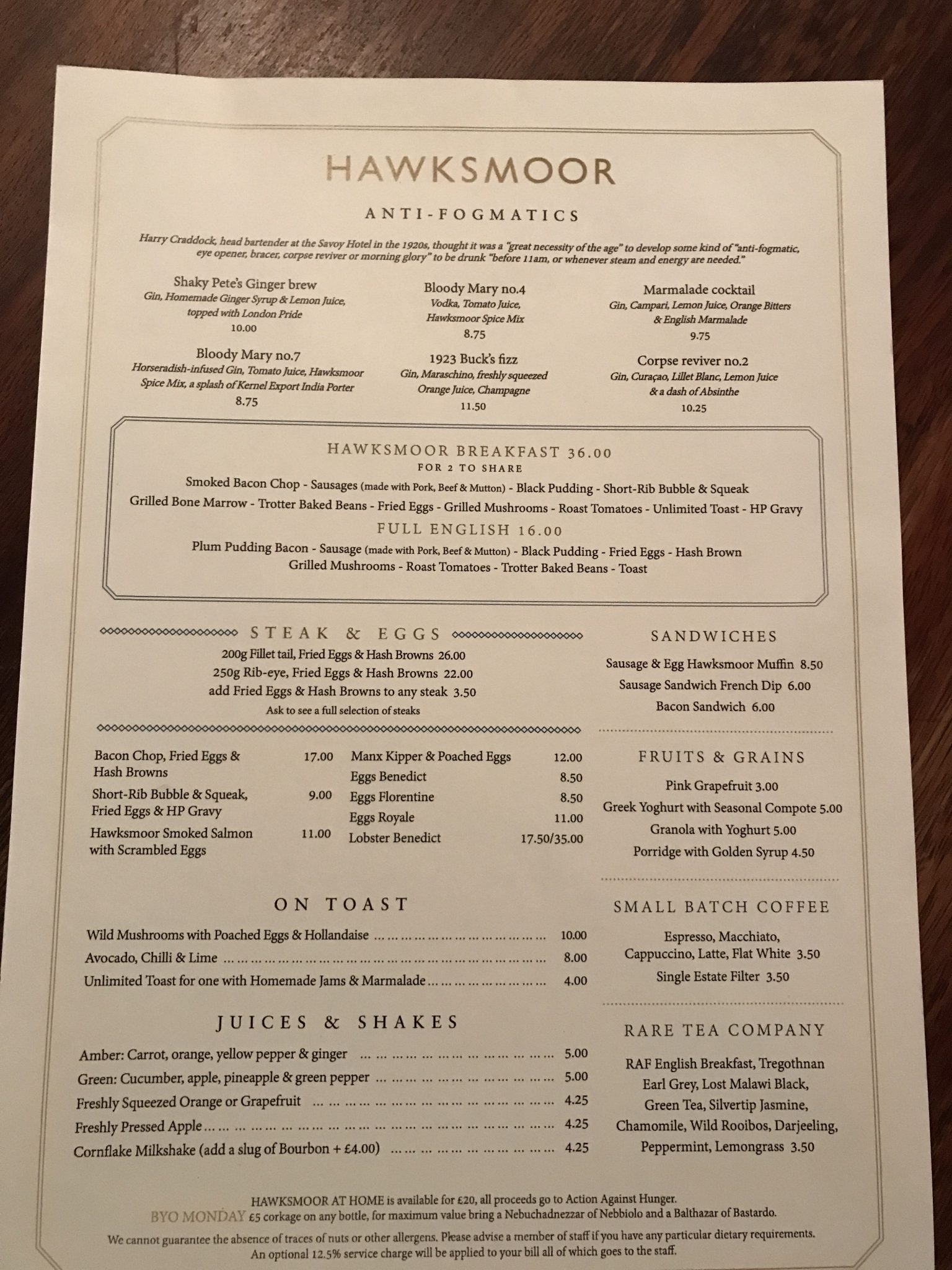 I’d only ever had a Bloody Mary once before in my life and that didn’t quite end as I expected on a flight from Sydney to Bangkok, which shortly followed by a viewing of 127 hours on the on flight entertainment.
If you aren’t aware of said film it involves a guy who gets stuck in the dessert with his hand caught in a rock. The only way to survive was to saw his hand off with a small knife. Needless to say the air pressure, close up of the mutilation and choice of sound effects of the film sent me to the lav’s to wash my face in cold water till the hot flush subsided.

Many years have passed since that turbulent event and I was now mentally prepared for my re-acquaintance with the Bloody Mary, The No.7 at Hawksmoor had been injected with steroids however compared to your standard affair with Horseradish-infused gin, tomato juice, Hawksmoor spice mix, a splash of Kernel export India porter.

I was toying with the idea of a corpse reviver No.2 but absinthe at whatever past 9 in the morning was a push even for me. The other half had a coffee. 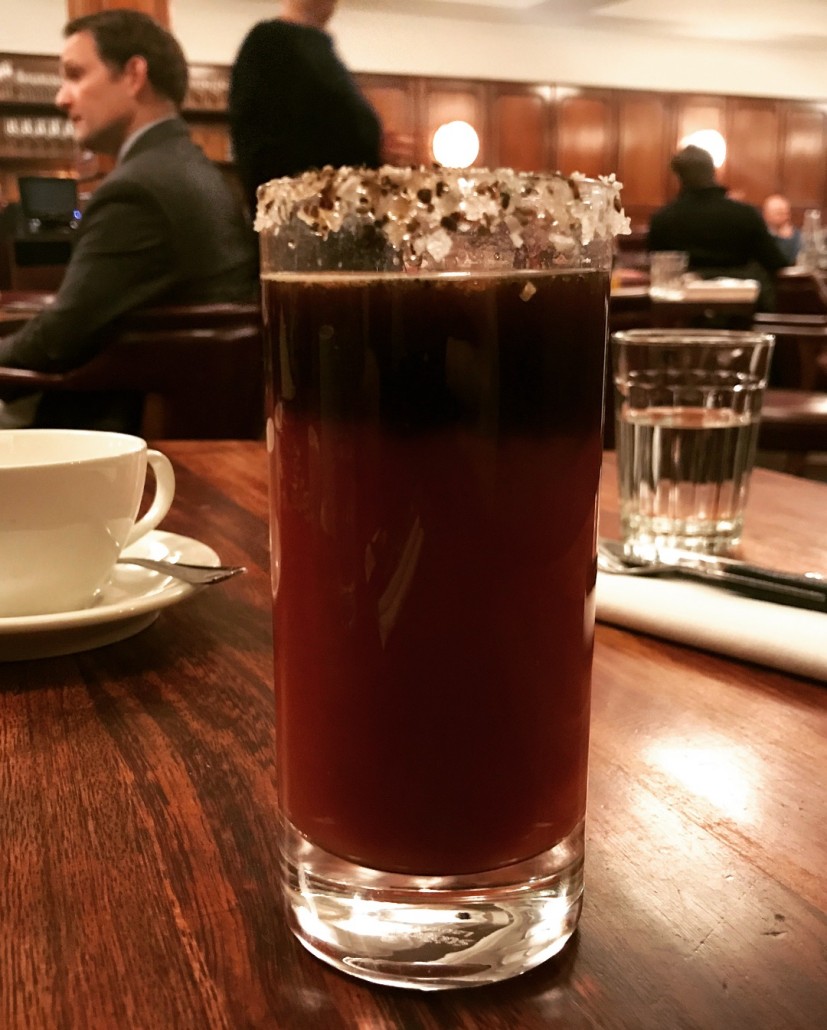 The drinks came out first and boy did the Bloody Mary pack a punch. If the sprint across East London on foot to try and beat an Uber taxi didn’t wake me up the spicy potent concoction did. A pepper and salt rimmed glass of devils blood with heaps of spice and healthy measure of alcohol content. The London based Kernel Brewery’s Indian Porter floating on top made a nice little addition too.

It wasn’t long before the platter fit for Henry VIII arrived. It was a good job we had a booth style table or we would of struggled on a table for two with all the extras.
We took turns to decant the meaty cauldron onto our plates equally and sawing through the bacon crisp bacon chop.

The fried eggs some of the most intense orange I’ve seen and perfectly cooked glistening under the light instead of a frazzled dried out mess you sometimes get with a breakfast losing any sight of liquid amber.
I couldn’t fault any of the items on the breakfast. This was no standard breakfast though with each item shown love and attention. Not just Heinz or Costco 5kg tubs of baked beans but trotter beans, not just some left over cabbage and potato thrown together there were short-rib bubble and squeak so everything was taken up a notch. The grilled bone marrow was a little ineluctable towering over the side of the bowl and guarding the contents beneath. I’d only tried marrow once but was in a starter of beef carpaccio with little nuggets dolloped around the plate and that was a while ago. I was keen to give it another go but it wasn’t really my cup of tea and wouldn’t rush back. It was like a fatty gloop somewhat like a soft gristle that melted on the tongue, which would I imagine give the most intense rich gravy but straight in the mouth with a fork is a little step too far for my palate.

Gravy should be a staple on any breakfast from now on if you ask me. I’d had it once with a ham hock hash at Cosy Club in Cardiff but this was something else. You can imagine all the juiced, fat and stock water they’ve got at their disposal at Hawksmoor and licked with HP, which I think should be banned normally with breakfast but it just added to the richness of the mahogany tinted liquor. 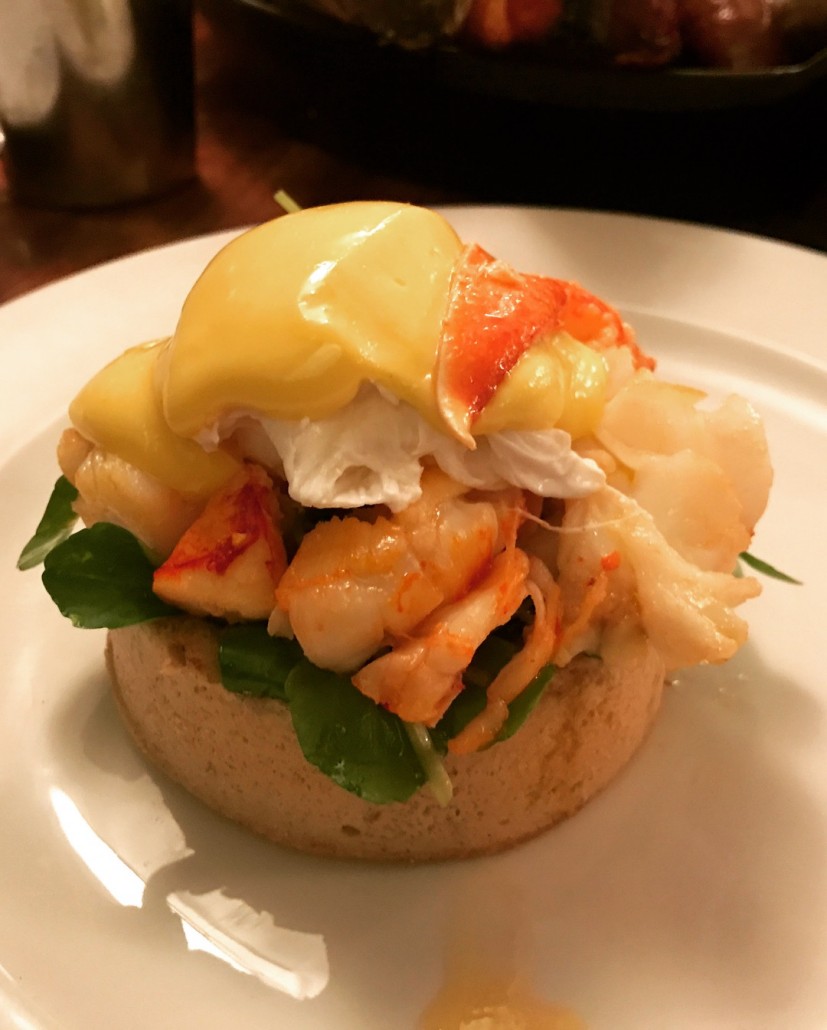 Not forgetting what would normally be the star of the show the Lobster Benedict. Luscious slathers of silky hollandaise coated the meaty morsels of lobster flesh mixed with gooey golden yolks of the delicate poached eggs. This decadent (side) dish was to die for but to set me up for the day I would have needed something a bit extra, so I’m glad it was only to sample with the sharing breakfast.

Ok so £80 is not your average bill at a greasy spoon for a breakfast but this was the epitome of grandeur to start the day off and smack in the middle of the epicentre of the city surrounded by the highest earners in the UK.

Did I enjoy it? Yes it was bloody lovely. Would I go back? You bet I would although I probably won’t take the piss as much next time and I’d love to visit in the evening to sample one of their legendary steaks, which I’ve been told by a well-known source they are some of the best in London.
The cocktail menu doesn’t sound too bad either. 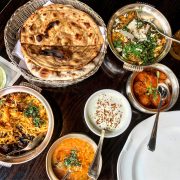 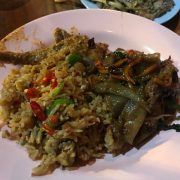 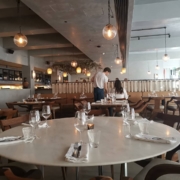 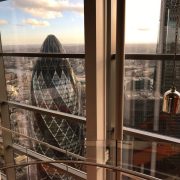