It was the other half’s birthday a few weeks back and unlike us, we hadn’t booked anywhere to go. She’s fancied Hellenic Eatery for a while but it’s always be chocka block every time we’ve passed.

We tried calling them as soon as we got home from work but again, there was no room at the inn tonight. I’d seen a few insta posts about Maria’s Greek Taverna recently and thought it was along the same lines as Haelinic so we rang and got a table.

The restaurant was small and cosy inside and they seemed to squeeze as many tables in to fit, which did mean there’ wasn’t much room between the back of my chair and the table behind. Luckily for me nobody was booked in whilst we were eating or we would still be fighting to get out from under the table.

I liked the decor though as it really did look like it could have been nestled in a back street in Greece and seeing that we hadn’t had a holiday for a good few months I felt like I was having tea in the Med, especially with the heat wave we were currently in.

We had a quick scan over the menu as we hadn’t looked prior as it was last minute. There were a few well known dishes and you could either go for a mezze of little dishes or go big (what I was under the impression at the time) with some of the mains. 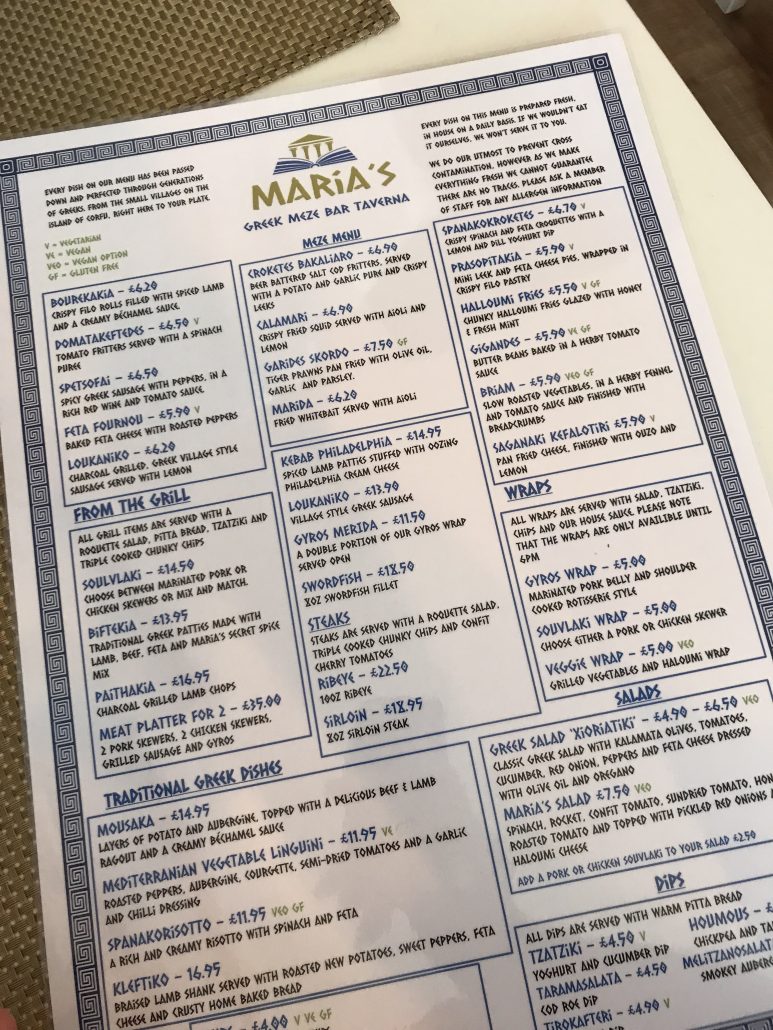 Based on pricing from some other well known establishments who specialise in meat skewers blistered over hot coals such as Saray I thought the mains seemed a little expensive. Based on the price difference of about 30% I thought this would be made up in portion size.

We opted for a few mezze plates and one main as we’ve been satisfied with a main between us with some side dishes at some other Cardiff restaurants of late and we thought we might of gone overboard on our options at first. We even though we might of needed a bigger table.

For the small dishes we went for beer battered salt cod fritters (£6.95), spicy Greek sausage with peppers and red wine (£6.50), halloumi fries (£5.50) then a portion of dips, Hummus and Tzatziki priced at £4.50 each as they didn’t do a mixed selection. I would of had the smokey aubergine one too but I refused to pay £15 for 3 dips as I thought it was extortionate.

For the main we opted for a mixed souvlaki with one chicken and one pork kebab with chips and pitta.

The food did seem to take longer than expected but we did foolishly ask for it to all come out together, so that may have been the issue. The Halloumi fries were really good and probably my fav dish on the table. Golden brown, slight crisp on the outside and lovely salty core.

The spicy Greek sausage was fine, not that spicy to be honest but we did finish it all off. The salt cod fritters were ok. If you like salt cod you probably would have enjoyed them. They were plate I was least expecting to like and just ordered them because I’d never tried salt cod and took a thought I would take a punt on them.

The breads and dips were fine with hummus and tzatziki with toasted pitta. They were just ok really nothing special and would of liked something a bit spicier or a mixed selection with smaller individual portions like we had recently with our mezze in Turkey that had about 6-8 little portions of dips that were the star of the show there. For 6 of the dips you’re looking at £30 here, which is absolutely nuts if you ask me!

Then onto the main, which to be honest for £15 I was pretty pissed off at. I was expecting a bit more substantial on the skewers but they were beyond disappointing for the money. I would of expected either sub £10 or 4 skewers based on the meat content for £15 compared to what you get at some of the places you can pick a kebab up on that road into Cardiff.

I wouldn’t say I disliked the majority of the food The only dish I didn’t like was the salt cod and that was personal preference. The food was ok and that’s as far as it went really but at that price it was way over priced in my eyes. We’ve paid £20 between us at Saray for two skewers, chips, breads, a selection of dips and pickles, mint tea and even had some baklava thrown in for free and we were more than content. The food at Saray and Sham Nights was more tasty too to be honest and near half the price I’ll stick to them in future.

Based on that I can’t see me rushing back to Maria’s. I’ll definitely give Hellenic Eatery a try further down the road but I’ll stick to Saray or Sham Nights or some top quality meat and tasty accompaniments for a very reasonable price.

For what we had, one bottle of water and a carafe of house wine it cost just over £50. Not a huge bill by any means but for what you can get both in quality and quantity at half the price this is probably the first and last time I’ll be through the door. 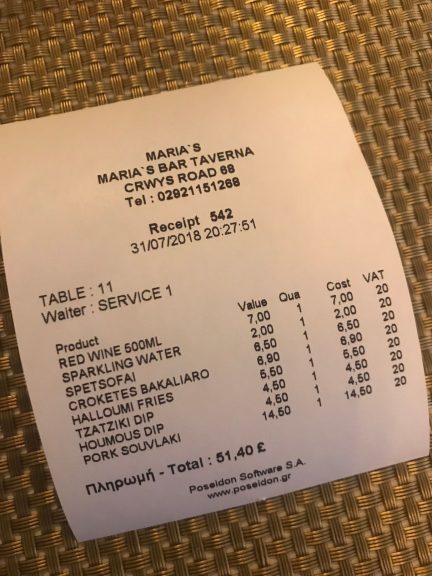