Are you new to Crossfit and wondering what those straps are that regulars wrapped around their wrists?

When I first started doing Crossfit nearly 6 months ago even though I had done a bit of weight training once or twice a week over the years my wrists were quite week and had a bit of pain in them after some exercises the day after.

I noticed a lot of the guys in the box were wearing the wraps so thought I would give them a go. I found that i had a lot more stability and support immediately with exercises like head stand press ups and moved from scaled versions to RX’in them in no time. I also found the wrist straps good for some of the warm up exercises such as bear crawls as my wrists did used to hurt quite a bit from these as they were relatively new to me and my balance wasn’t the best to start off with.

I also used to get a bit of pain when I first started front squats with flexibility issues from not having done them before starting Crossfit but the wrist straps do seemed to have helped a lot even if my flexibility has improved.

What are the best wrist wraps to wear for Crossfit?

I’ve only tried the standard wrist wraps I picked up in a local health shop from Maximuscle with the thumb loop and velcro strap to keep the wrap secure on the wrist. One thing I have noticed with these wrist straps is that they are very thick and bulky making me sweat a bit too much leaving them smell quite quickly if they are not washed regularly. The velcro on the wrist strap if wound too tight can scag the material of the wrap meaning they might not last as long as they should.

I did notice another kind of wrist strap worn by some of the other Crossfit regulars who had been going for longer and did some looking online and they are called strength wraps. They seem to fix the issues I had with the wraps being too thick and bulky and also there is no velcro to damage the wrap.

The Strength Wraps are a lot thinner in material and have a thin rope when wound around allow the wrist wrap to be tightened and loosened easily without having to take it off. This is ideal for a WOD that requires lifting or exercises with wrist support then followed by an exercises which requires more flexibility. 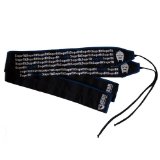 The price of the Strength Wraps are around £20, which is nearly 4 times more than the standard wrist wrap from £5 but you will probably still be using the same ones in a years time when you might have gone through a couple of the standard ones due to the scagging or the stink from overly sweating.

I’m going to carry on using my standard wrist wraps for another month just to get some more wear out of them then I’m planning on trying out the Strength Wraps for my strength training and WOD’s at Crossfit.

If you want to buy the standard wrist wrap then go to the Maximuscle made from medical grade elastic.

For the lighter and more efficient Strength Wraps for your Crossfit WOD’s then head over to Amazon.