I was sat in a pub in pub in the Pembrokeshire Countryside a few weeks back, sipping on a pint of local ale whilst catching up on some socials. We’d been busy walking around Cardigan all day, then me foolishly braving the March Welsh sea by taking a plunge.

I noticed that Milk & Sugar in Cardiff were running a competition for two a table for two at their upcoming collaboration with local chef favourite John Cook, formerly of Arbenig in Pontcanna. Long story short, we managed to win the competition so were joining dinners on the launch night at the Yr Hen Lyfrgell on the Hayes. It was quite funny as we had seen John’s other side project Dirt being advertised at Crwst in Cardigan that same day.

Sadly I was late to the party with Arbenig, with chef Tommy Heaney taking over the venue before I had chance to sample his food, although John seems to have his fingers in many pie’s at the moment and I have managed to try his other incarnation with Dusty Knuckles Phil called Horn to Hide at Sticky fingers.

Anyone who’s anyone has probably set foot in Yr Hen Lyfrgell (The Old Library for you non Welsh Speakers) so I won’t bore you with the details other than saying it’s a lovely big venue for lunch for the whole family or to grab some excellent coffee for a chat on their long tables with friends.

The new residency from John and his wife Ceri is called Ember and the concept is 4 courses of locally sourced, quality food from a fixed price menu. There’s a one meat option menu (£40) and vegetarian (£30) option menu. Everyone eats the same, so there’s not quarrel’s over whose having the lamb because you wanted to try two different things on the menu. In my case it also saves me hours of changing my mind for two weeks prior to attending a restaurant. 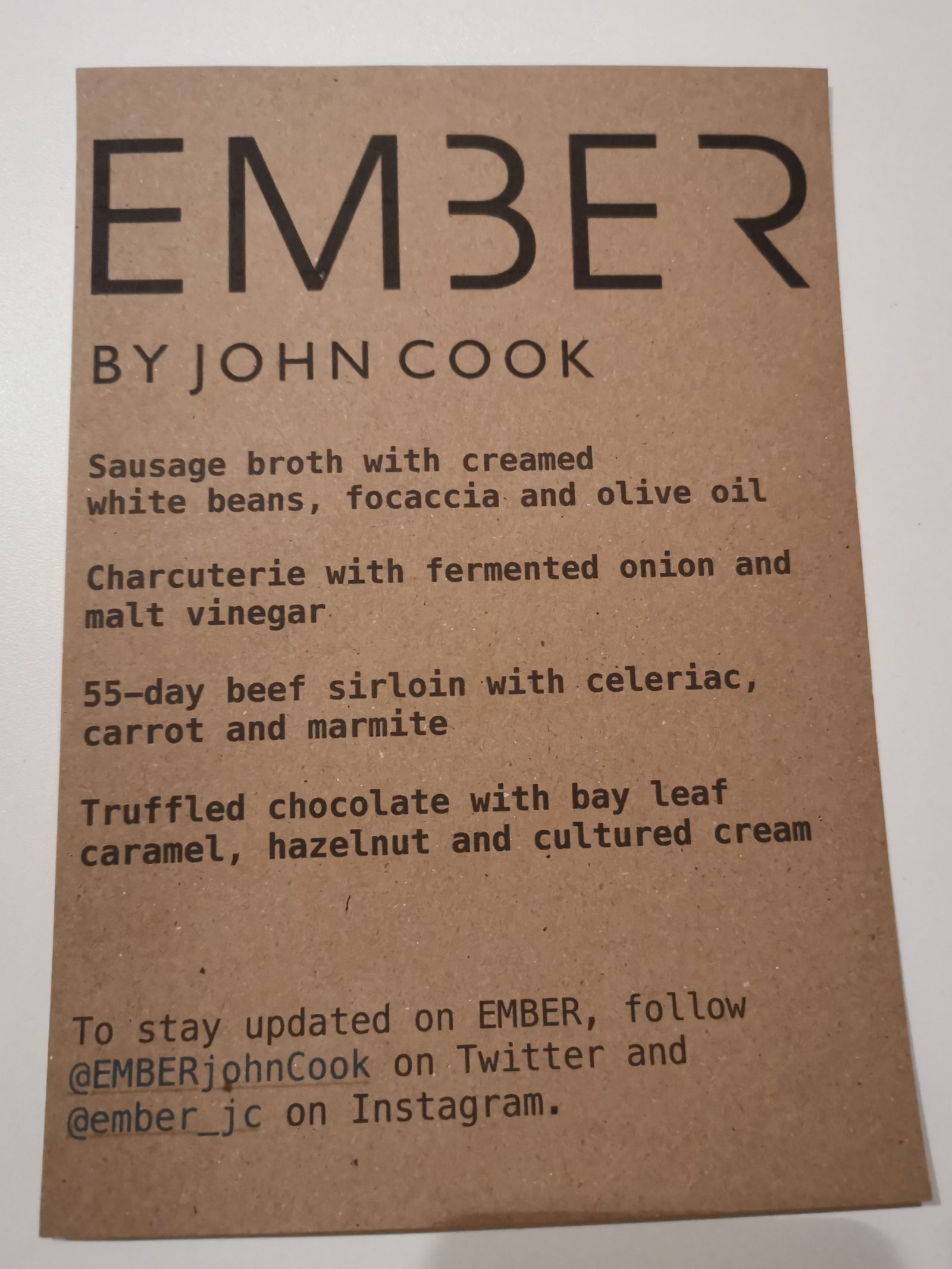 We asked beforehand if we could bring the (future) mother in law along but pay the difference and the guys were great and fitted in another space on the table. No half hour deliberating over the menu, it was three meat options and a bottle of the highly recommended Argentinian Malbec. That would have been my first choice anyway and at around just £20, I thought it was an absolute bargain for a bottle. 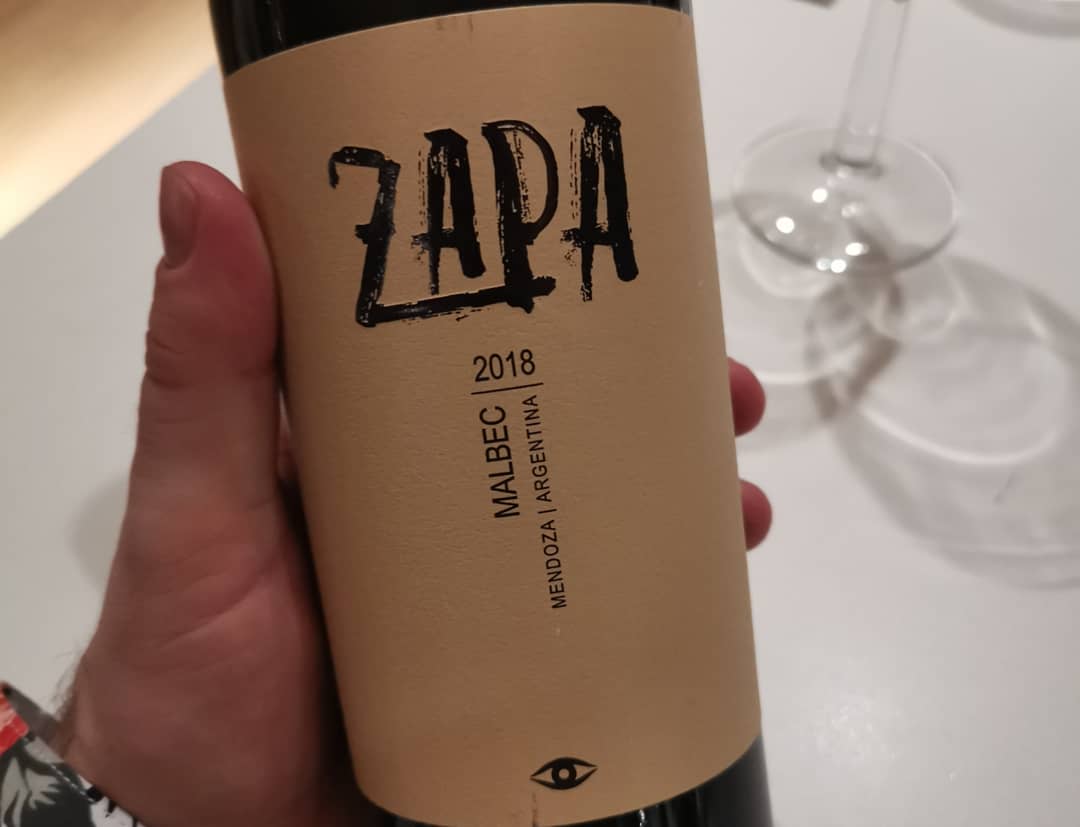 First up on the menu was a sausage broth, with creamed white beans, focaccia and olive oil. The sausage was soft and crumbed into the rich and flavoursome broth. A lovely crunch to the oily focaccia that I dipped and ladled full of the gravy, before mopping any remnants from my plate. A hearty dish that you could easily have dived head first into, in front of a roaring fire, with half a loaf to help make a dent in it. Luckily John has a bit more understanding of portion control than me, that allowed me to power through to the next three courses. 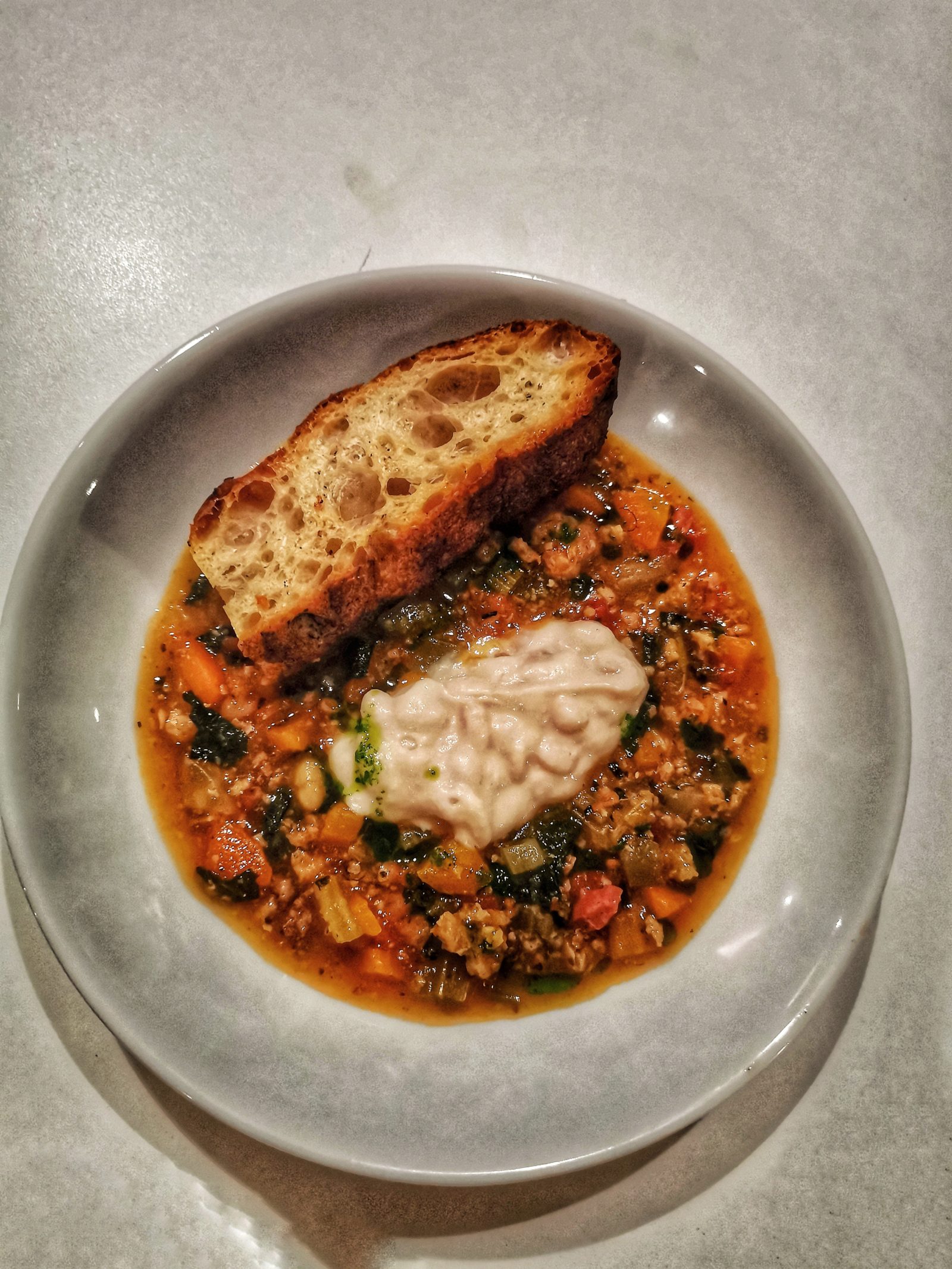 Next up was a plate of charcuterie with fermented onion and malt vinegar. I do love a healthy mound of cured meats, with pickles and red wine at the best of times and the addition of some toasted almonds, to add a touch of smokiness and crunch was kindly welcomed. I did enjoy the dish although for me and the general consensus of the table was, we would have liked maybe a bit of local cheese to break up the meat, even if it meant having a bit less of the cured pork, for a bit of variation. Onto the main event and I’d seen some teasers on Instagram of the beef ageing, at Cardiff Butcher. The course read: 55-day beef sirloin with celeriac, carrot and marmite and it came out brilliantly pink, on the custom made ceramic plates from a local potter. I had to dissuade the other half from collecting the full set in her handbag, before they came to take away each course, as they really added to the rustic charm of each plate. 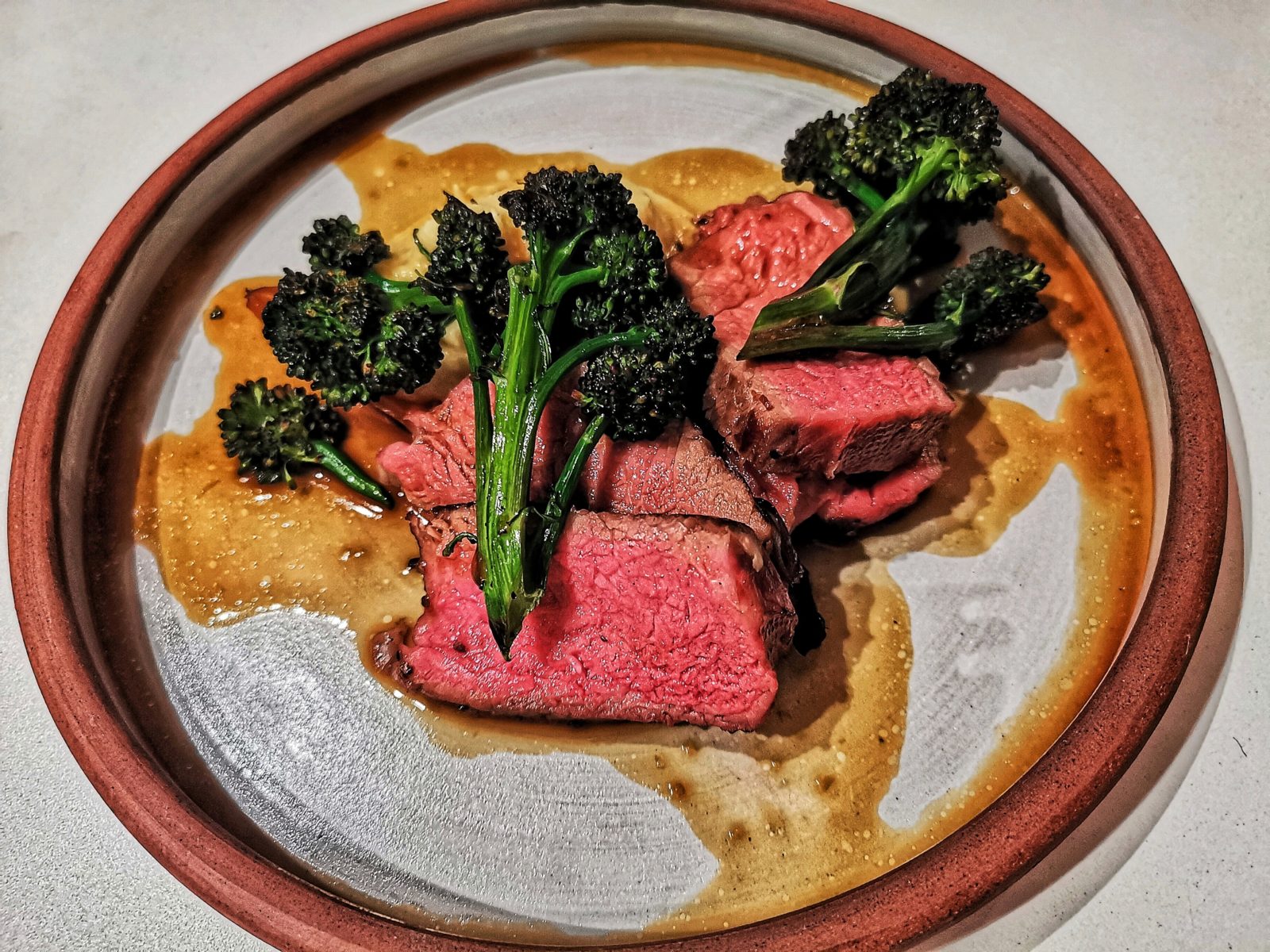 The beef was so tender, with slight caramelisation on the crust that paired superbly with the rich coffee and marmite jus, oh and the bold red beauty in my glass from the Patagonia’s. The smooth, silky highly addictive celeriac got me secretly begging that someone left some of theirs, as I’d used my finger to painstakingly mop every last drop flavour from my plate. Unbeknown to me at the time, but the butcher and his wife were sat in front of us. I would have patted him on the back for that beef at the time if I’d known.

Last but not least was a truffled chocolate with bay leaf caramel, hazelnut and cultured cream. This reminded me of a deconstructed snickers and the ill-fated Cardiff Burger and lobster snickers dessert, but on steroids and with a lot more love. Basically 4 of my favourite things on a plate, what’s not to love? Apart from my obsession for adding whisky to anything with chocolate or caramel, but I’ll let them off, as not everybody is an alcoholic and adds alcohol to every course. Rich, chocolatey, nutty and a faint vegetal addition to the delicious caramel. Again, I was trying to subliminally convince both my fellow dinners that they had a gastric band and they’d eaten quite enough at this point and I was going to take one for the team and resentfully finish off all three plates. This didn’t work, so I just ordered more wine. I was gutted about not booking into Arbenig before it closed, so I was super chuffed I got the chance to sample some of John’s food and for free, after winning the twitter comp. The Ember residency takes place each week over the weekend, for the next couple of months at least and after speaking to John and Ceri, they are looking at introducing a new menu each month. This is excellent news as there really is a lack of decent restaurants in town and once you’ve been to one, it’s a while before the menu changes.

I’d be more than tempted, in fact I’d be more surprised if I didn’t come back in May, to see what’s new on the menu. £40 each for 4 courses and bloody lovely bottle of Malbec for £20, that’s more than a bargain in my eyes. I’d like to say a big thanks to Milk & Sugar and Ember for treating us to a table for two and a bottle of wine as part of their twitter comp. I’ll be seeing you again soon!

For booking a table at an upcoming Ember evening at Milk & Sugar’s Yr Hen Lyfrgell head to Wriggle who are now running the bookings. If you want a discount on your first purchase then remember to use the code AUHPSS when you register on wriggle and click referral.

There’s a dinning experience coming to town in April, that is like no other Cardiff has hosted previously.

For 5 days from April 10th 2019, some of the best independent food and drink venue’s in Cardiff will be taking to the sky, offering breakfast, afternoon tea, fine dinning and cocktails on a table raised 100ft in the air.

With panoramic views out over the city to die for (don’t worry I don’t mean literally as you will be strapped in tight) you will want to be quick to bag a ticket for your chosen flight.

The dinning experience will see a table, covered from the elements should storm Gareth fancy hanging around in town for another month, raised from the ground by a crane in front City Hall.

With 9 flights per day, the event is hoped to raise a lot of cash for the charity partner Shelter Cymru. Shelter Cymru provide support and assistance for those facing homelessness, with 20,000 people being helped just last year alone.

This dinning experience has been taking the world by storm, with events being held in London, New York and Dubai and now OOMFF are bringing the show to Cardiff.

The lineup for the event is as follows:

Having visited 6 out of the 8 venues, I know you’re going to be well looked after. I’ve been offered a taster flight before the maiden voyage to the Cardiff skies and I can’t actually wait!

Prices start at £50, to book go to Cardiff in the Sky