I’m a big fan of Pettigrew from first discovering them at Riverside Market on a Sunday with their arsenal of savoury and sugary goodies, tempting passing market visitors with generous helpings of tasters to hand. I think it’s fair to say i’ve gone through the whole menu at least once with the gargantuan Welsh Rarebit pasties, bombay bombs, goey brownies and the crisp and fluffy bread on offer, who could walk past empty handed. 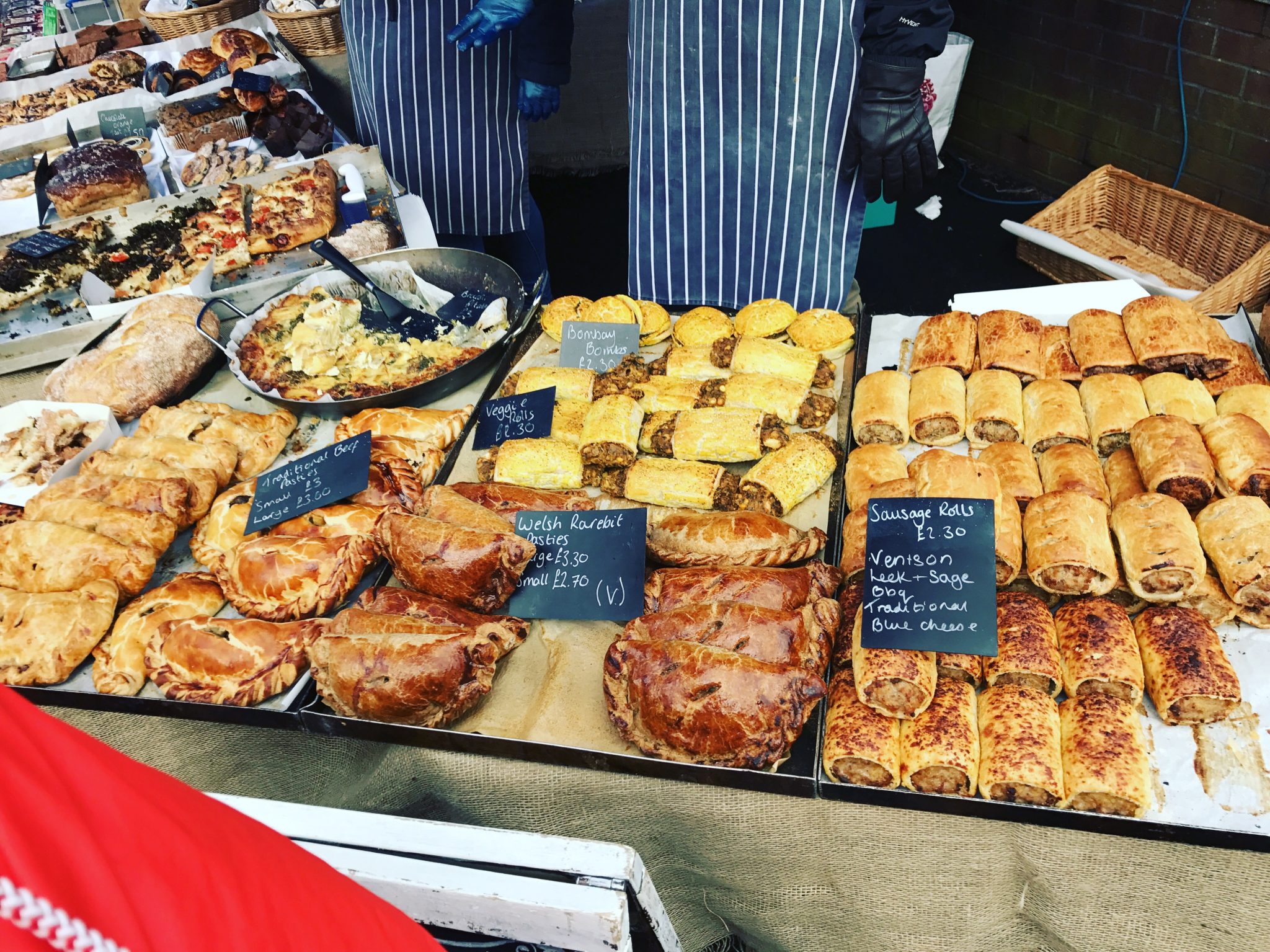 After following on Instaweb I quickly learned they’ve not only got a fully fledged bakery up near Victoria park but they’ve also comandeered gatehouse lodge within the castle grounds offering afternoon teas, cake and an array of speciality teas at the Pettigrew Tea Rooms.

Well it’s been nearly a year now and I still hadn’t popped into the Pettigrew Tea Rooms to see what’s on offer even though i’ve jumped ship from Newport and now working not even 100 yards up the road. I wasn’t quite sure whether they did take aways like pasties or breakfasts and did poke my head in once on a Friday morning requiring some much needed stodge or grease on the way to work after a few beers the night before but still was none the wiser.

Then last week Mwsh was finished for the day in work early so decided to walk half way to meet me but accidently fell into Pettigrew Tea Rooms on the way. Feeling left out, I clocked off to head over before they shut shop to see what was on offer.

Seeing as they were closing soon I didn’t want to be like that guy who orders 3 pints for themselves at stop tap and sitting there for 2 hours whilst everyone cleaned around him, clock watching as their waiting for their train home so just bought a cake from the treasure chest of delights next to the till. After some deliberating I opted for the coconut and passionfruit. A nice healthy slab of crumbly, tropical stodge. I begrunginly offered a meagre corner for Mwsh to try and we were both suitably impressed. She’d devoured one before I arrived so sadly didn’t get to try that one but I was more than happy with my choice. Would of gone nice with a cuppa but my own fault for arriving so close to closing although I’m sure they would of accomodated had I asked. 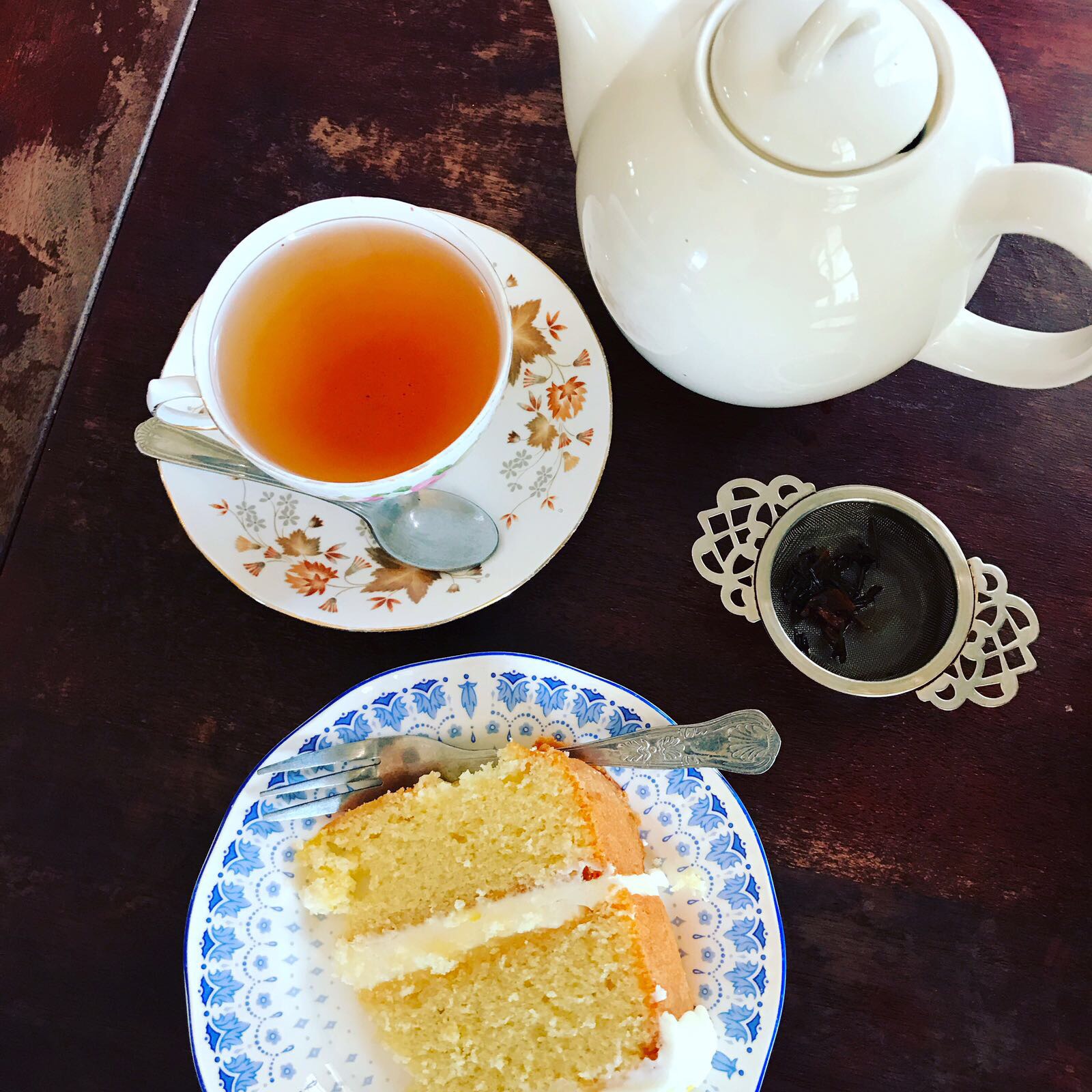 After sussing the place out and having a sneaky peak of the menu I fancied trying some food there to see how they compare against the awesome selection of baked goodies from the bakery. I’d seen Wriggle starting to advertise breakfasts at Pettigrew a few weeks back but they were starting at 9am to 11.30am but I was usually in work by 9 so that didn’t work until I saw one on a Saturday that Mwsh happened to have off work too so I snapped the deal up for £5.50 each for a full Welsh breakfast instead of £8.50.

Unbeknown to me it was the Flower Show in the castle grounds that morning after getting into a conversation with Pettigrew on social media and they said to try and get there early but being a Saturday that was never going to happen. Anyway we got an Uber as we were running fashionably late to reach Pettigrew within the Wriggle time slot and it was like a sale in Marks and Spencer on a Sunday, oldies everywhere heading to the flower show and we had to weave in an out of the almost stationary human traffic. We managed to bring the sun with us from Italy as it had been sunny for a good week since coming home and they had laid out all the tables and chairs they could muster outside. Breakfast in the sun sounded awesome but to our dissapointment breakfast was only served inside it was just teas, ice creams and the baked goods from the bakery table parked up outside.

Luckily we got a table straight away inside after panicking we would be qeueuing down the street till gone midday and missing the breakfast as I was absolutely starving. I didn’t even need to see the menu a full welsh it was with a pot of English breakfast to help that breakfast vacate my eager fork.

Food wasn’t long at all and it’s not very often I get excited by a sausage but it was hell of a banger! Accompanying the meaty sausaaage was two eggs of your choice, I went poached as I masacre them whenever I try them at home and getting a bit sick of my egg griddle in the morning. Homemade beans, lavabread savoury scone or you could of gone with thick cut toast, 2 quality rashers of bacon, a generous helping of mushrooms and grilled cherry tomatoes. Buried underneath the mound of fried heaven on a plate was two rounds of black pudding.

The sausage tasted delicious, it was a proper farmhouse number, good proportion of meat to herbs and it probably would of been a struggle with two i’ll be honest. I liked the savoury scone although I wouldn’t of minded having a couple of pieces of toast just to make a sandwich with my bacon and egg. They had toast on the menu but came with jams and presserves and I wasn’t forking out £2.40 for them considering the whole thing cost £5.50.

Homemade beans were ok, eggs cooked perfectly with yellow york oozing all over my plate on contact with my fork. Being a bacon snob I always inspect any bacon from somewhere new with hawklike precision and this was of excellent quality. None of that shrivelled, laser cut tracing paper garbage here. This is only being picky and was the only thing we could both pick up on from the breakfast as it was an absolute treat of a plate and that was the casing was still left on both our black pudding. I was ok because Mwsh told me but it was a good job she noticed it in her mouth before swallowing.

I’d never cooked black pudding myself as I’m a recent convert but to the bloodied breakfast staple but I did make the same mistake cooking up some white pudding I’d picked up from Riverside a few weeks back and was wondering how the little disks were imploding on themselves.

All in all it was a very good breakfast and a good brew of loose leaf. I’d recommend and will no doubt be back for a 2nd visit in the near future.

They don’t always have the bakery table outside with pasties and other goodies from the Pettigrew Bakery I think it was just there to monetise from the increase passing traffic from the flower show but on speaking to them on Twitter on Friday evening they were more than happy to bring whatever I wanted down to the Tea Rooms for me to pick up during the day with the fresh delivery of bread so give them a bell on social media if you can’t wait till Riverside on a Sunday and don’t fancy a trek to Victoria Park.