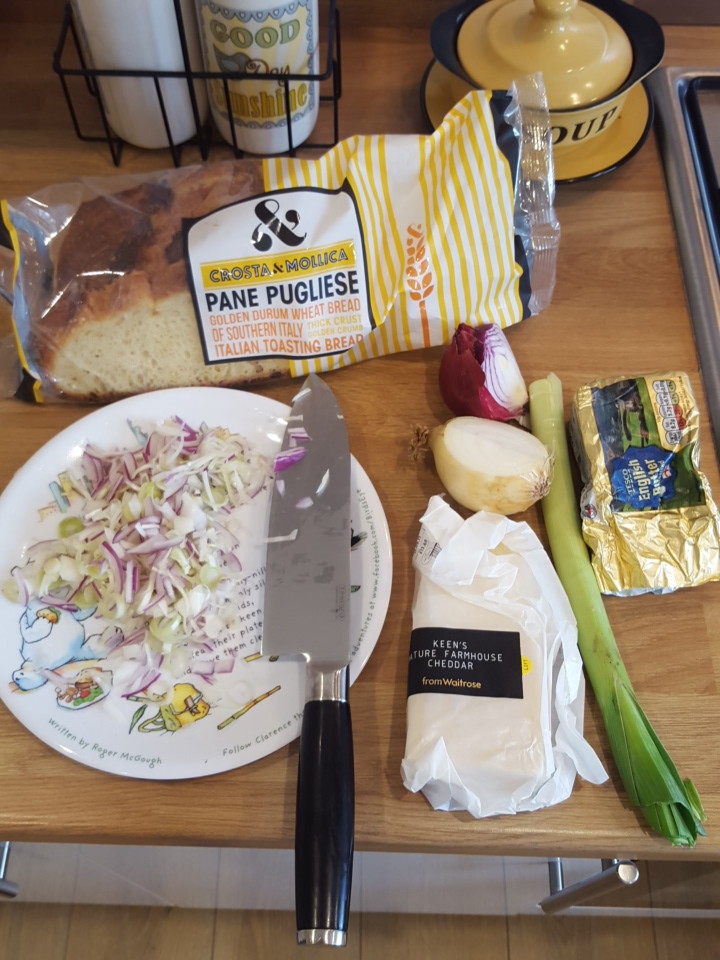 So it’s been a few years since I heard about Kappacasein’s in Borough Market after trying to track down the guy who made my hangover cure cheese toastie in Bermondsey Square Market after a wedding the day before although I could of actually sampled his as it’s a stones throw away from Borough Market and from what I could see from the mix he put in it was similar to Kappacasein’s 3 cheese, 3 onion and garlic mix and i wasn’t aware of the guy or the name of the stall that served me at the time as I was nearly conscious until the cheese crisp coated sourdough was handed over to me and sent smell bombs to my nose (good ones!).

I thought I’d have my own go at Kappacasein’s version apart from one or two bit’s as I couldn’t be bothered to spend too much for just one sandwich as the bread alone cost me £2.20 for 5 slices and they didn’t have any Montgomery or Ogleshield Cheddar in Waitress so I had to settle for Keens Cheddar and I had an impending date that afternoon so didn’t fancy my chances with garlic for breakfast neither was it going to do anything for my stinking hangover from a good 12 hour sesh at Curfew’s inaugural first secret garden party event the day before in Pontypridd.

So my version was to use Pan Pugliese bread buttered on one side and left to toast on my teppanyaki grill, whilst i assembled the mix of white onion, red onion, leek and keens cheddar in a bowl ready to add onto the freshly toasted buttery bread when i turned it over not before buttering the other side. add a generous amount of the filling, i didn’t put enough to start as it wasn’t oozing out and crisping up onto the grill to my liking like i remember so i had to keep adding more plus i didn’t have a decent sandwich press like they used in Bermondsey Square Market but i would painstakingly and with ease not to lose a morsel on the flip over to make sure each side was golden with toasted buttery bread and an even melt through the middle with just the right amount of gooage spitting out from the sides of the sandwich.

Once done to your liking which took me about 15 minutes of turning on the teppanyaki grill so that it didn’t burn too much and because I needed that cheese burning the inside of my gums right now! Everyone knows that it doesn’t taste the same exactly like a pizza if you don’t annihilate the inside of your mouth and gums with molten cheese it’s such a pleasure and pain experience you can’t deny yourself of.

You may need a kitchen towel or if you’re posh and have serviettes hanging around in the kitchen by all means use those to stop your fingers blistering from the hot magma laden cheese and savagely toasted bread and attack at your peril!