We recently got an invite to Wales most famous salt brand Halen Mon for the launch of not one but three new ventures at the Coastal HQ along Anglesey’s treasured Menai Straights.

Normally I would have questioned a 10 hour round trip for a launch event but this was no normal launch party. Having used up my latest pot of black garlic ketchup on everything apart from my cup of tea, I knew Halen Mon had something special planned last Saturday.

Their famous salt is used by Michelin Star chefs around the world and even has a former president as an avid fan, with Barack Obama favouring the Welsh sea salt in his chocolate.

The Halen Mon range has exploded over the past few years featuring a hint of their white gold in the majority of products along with seaweed, spices and good old fashioned smoke.

The latest launch though is covering a few different areas and not just condiments. There is a book “Do Sea Salt” written by Jess and her parent’s, the founders of Halen Mon Alison and David. It’s lovely little book, featuring salt in all it’s greatness from history, why we use it, how to use it and some great suggestions on elevating humble recipes by utilising this great natural product.

I haven’t had a chance to sit down yet and get stuck into it properly but from a quick scan of the book, I’ll definitely be trying some of the ideas and I love learning about the history of anything food and drink related. There’s also a mention about creating your own sea salt, something I’d only mentioned on our last trip up to Anglesey back in April .

I said I wanted to get gas cooker and heat some water from the Menai Straights, to try and make our own Anglesey Sea salt before we got the invite to Halen Mon HQ, so this book will make sure I don’t waste hours of my life watching the water bubble away over a camping stove.

Well this was a surprise for me, as I only found out a couple of day’s before the event that they were also launching a gin on the night. Well I found out when they presented the first bottle off the still to Prince William and Kate on instagram, two days before.

The gin is a collaboration with the increasingly popular North Wales Distillery Aber Falls. Aber Falls, was setup initially as a the first Whisky Distillery in North Wales for over 100 years but as whisky takes 3 years and 1 day legally be called whisky, they sought out other forms of revenue in the mean time. They initially launched three gin’s to much success and have expanded their range more recently with an entry level vodka and gin along with a more premium offering. 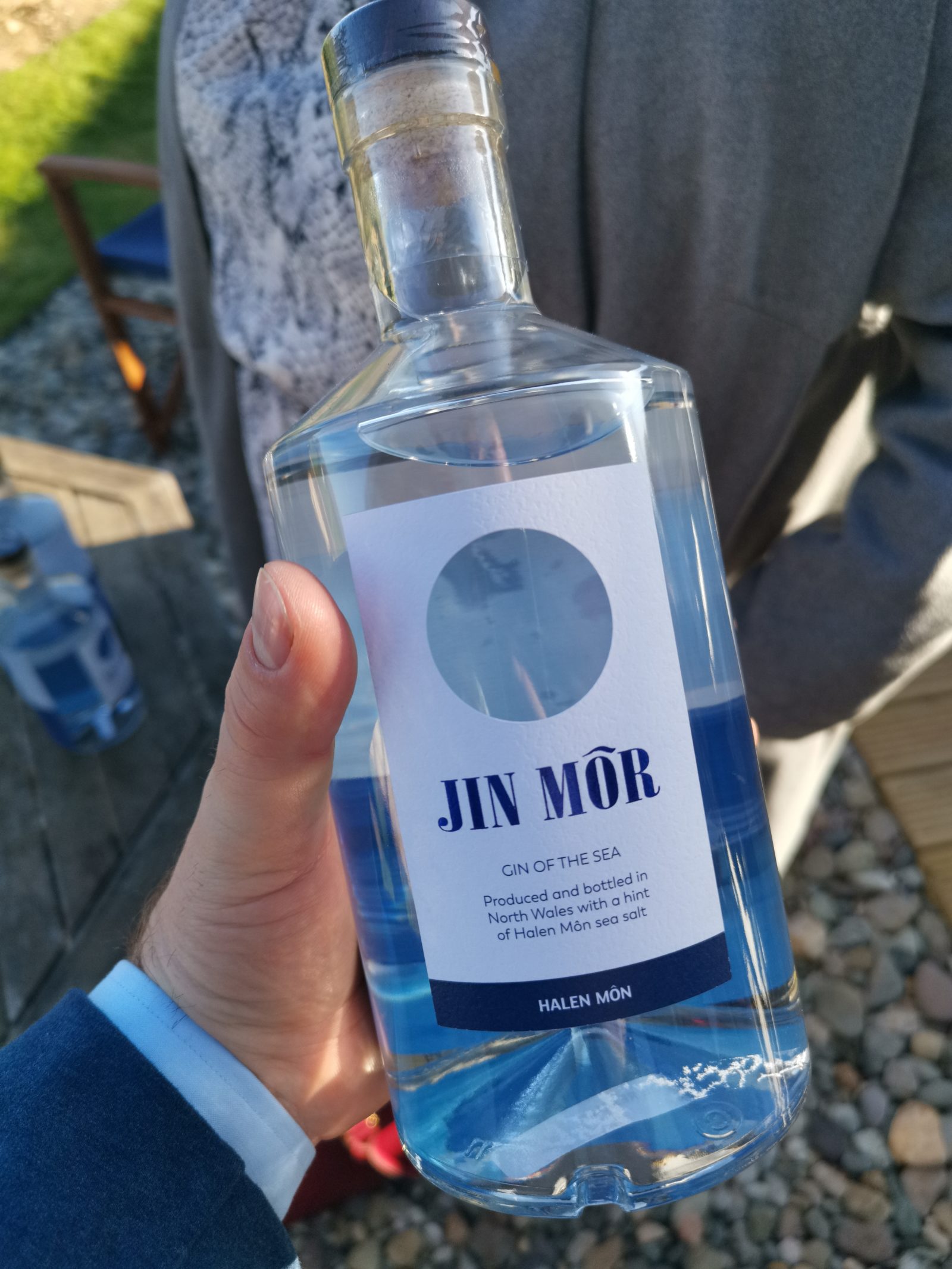 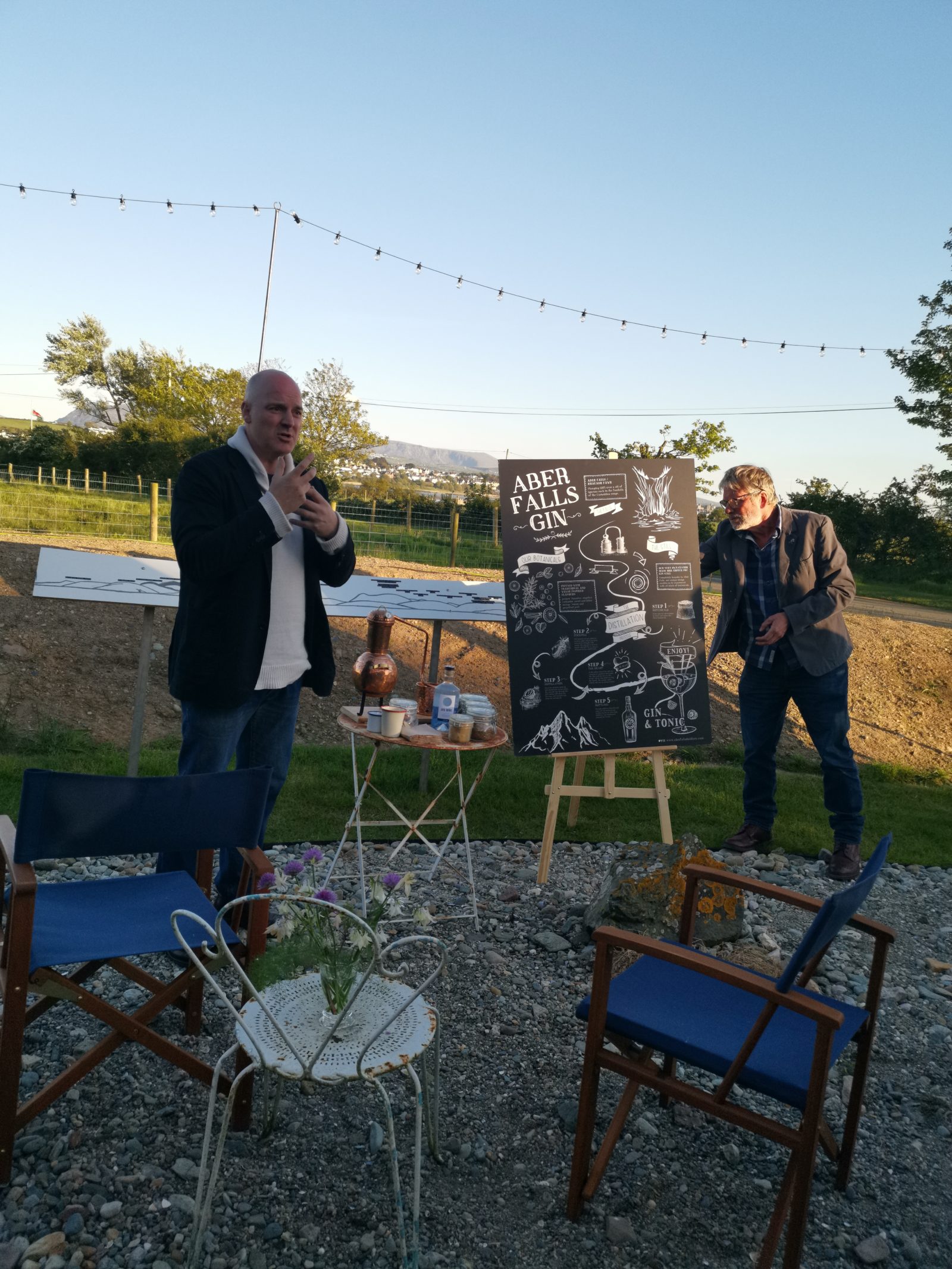 The Halen Mon gin, will go by the name of Jin Mor and has the addition of their Halen Mon to the mix of botanicals. I was told that this was not just to add a salinity to the drink but because of the process that happens when you add salt to anything. It draws out moisture and oils from most things thuse drawing more of the flavour from the botanicals.

On taste, I was expecting it to have a saline kick to it but far from it. The gin was smooth, pleasant and delicious. I didn’t get to try it neat on the evening but did have more than my fair share mixed with a bit of tonic and it was exceedingly morish.

We had a goody bag to take home with a little bottle of the juniper spirit, so I will be taste testing it neat on the weekend for research purposes.

Apart from the salt there was nothing too out of the ordinary on the botanical list with the obvious juniper, coriander seed, angelica root and licorice although I didn’t see the full list.

I was half expecting a bit of the seaweed that they forage a just a stones throw away from the salt harvesting site that is used in some of their other products to make an appearance but that might be reserved for further down the line.

I’m sure the Halen Mon gin would make a very good martini or red snapper at the new cafe would be a good choice, using some of the other range of products such as the bloody mary ketchup for flavour, seaweed for umami kick, chilli for heat and a smoked salt and cracked black pepper rim. I might suggest this one to them and more than happy to work on testing to get the perfect mix 🙂

Last but not least is the new fresh food offering from Halen Mon called Tide. Not content with supplying kitchens and restaurants across the land with their excellent pantry staples, they are going one step further and opening a food outlet next to the Halen Mon visitor Centre. 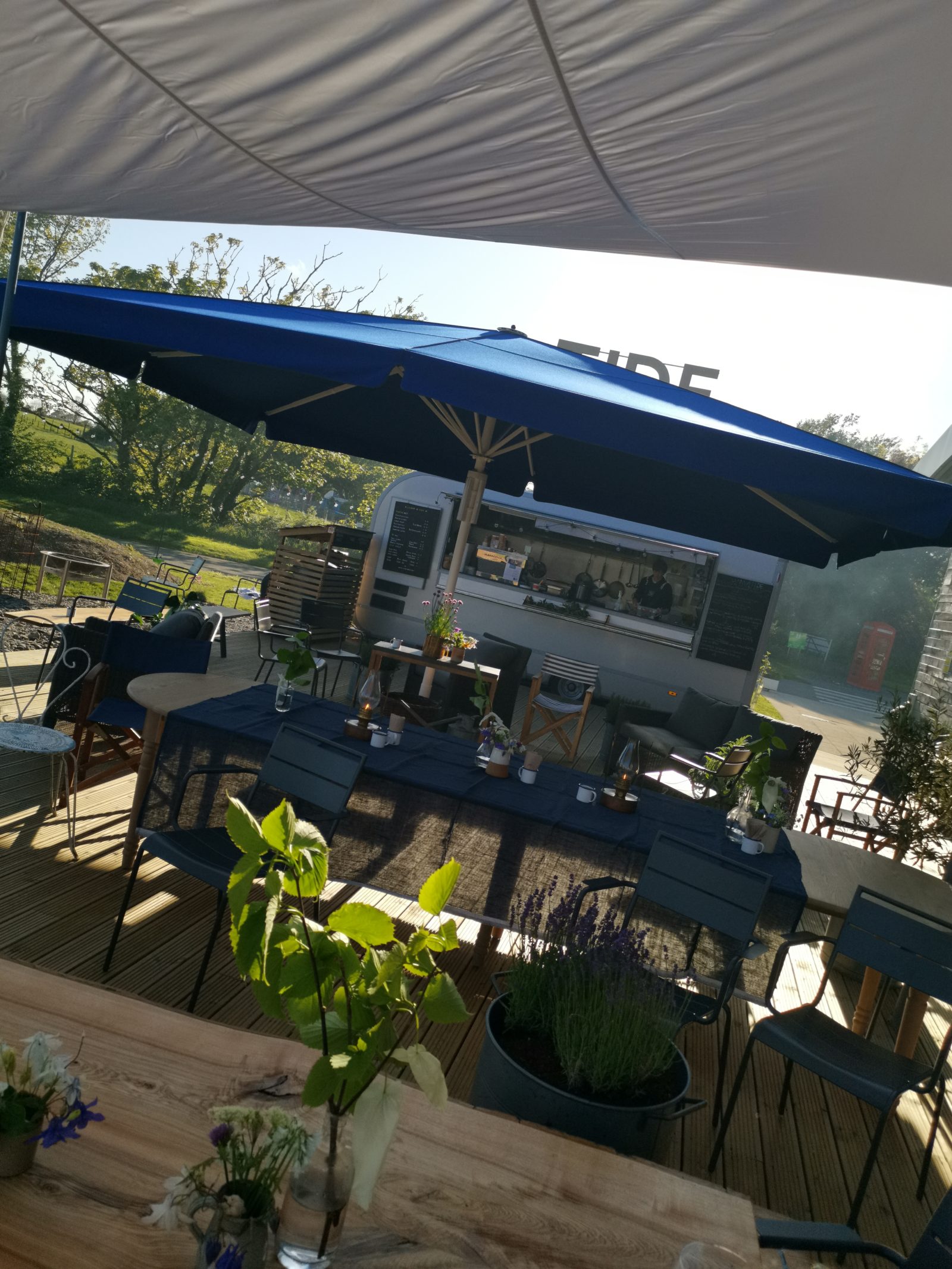 The food will be cooked in a fully kitted trailer next to the centre, offering alfresco dining and refreshments to visitors of the centre or just people wanting good coffee and fresh, local and delicious food.

We were treated to a number of tasters and appetisers whilst our fellow guests arrived to the sea front location. Halen Mon couldn’t have picked a better day, the sun was shining with hardly a cloud in the sky.

The Canapes consisted of freshly picked oysters from just in front of where we were stood with both pickled apple and some that had been shown the fire over a log burner, some 5 metres away with lashings of garlic and butter.

Crisp breads beautifully decorated with flowers with peppers and an amalgamation of pureed stuff, that both looked enticing and tasted scrumptious.

Then there were mini tacos with healthy slabs of golden pork, fresh apple and micro herbs for a kiss of savouriness. These just how i like tacos, stuffed, overloaded and more than my mouth can handle. There was no portion control either, to my delight, so I had a couple of each to pair with the gin.

I could have easily have sat and filled up on the tasters, but we were there to sample something more substantial inside. I liked that everyone’s name card was somewhere random (or was it) so they made more of an effort to speak to others. I was sat 3 away from Llio but with everyone’s love of food and just enjoying life, we all had loads to talk about. There was someone who made his own chutneys that will be featuring on the menu to my right and a tea master that now works trading in spices on my left. Before the meal commenced we had a brief introduction by none other than Hugh Fearnley Whittingstall, whom the new Tide chef Sam worked for, at his time at Riverside Cottage.

We were given a choice of wine as we sat down, with me opting for red, as I can’t take to all white especially if it’s too dry. There was never going to be a Blossom Hill being brought out that’s for sure and I wasn’t disappointed with the offering that did come out, a Valenciso Reserva 2009 Rioja. Not sure if this is true, but someone on the table mentioned it was the house wine at the fabled El Bulli in Spain. Well you can’t get much better than that for recognition. 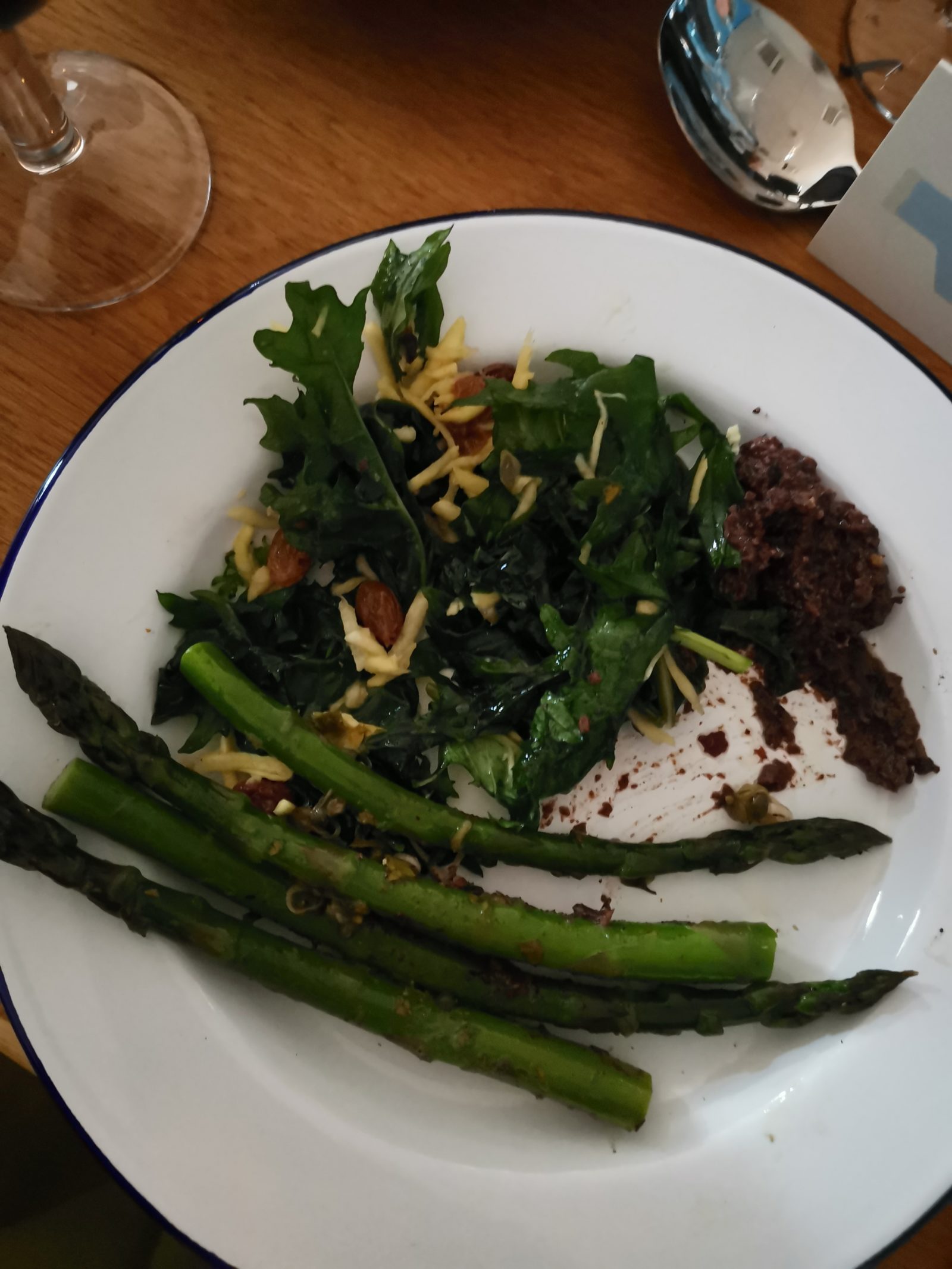 The first dish was very informal and more of a sharing experience, which was a nice change. We had some amazing sourdough, which is always a fav of mine baked by a friend of the family who was also sat amongst us, dining for the evening too.

This was alongside some asparagus cooked in loads of butter and garlic, new season kale that was so delicate compared to kale I’m used to without the large oversized stems and tossed in orange and raisins alongside a help yourself bowl of olive tapenade. I was a good boy and only ate two pieces of bread, even with the remaining slices plonked next to me. I’m getting better! 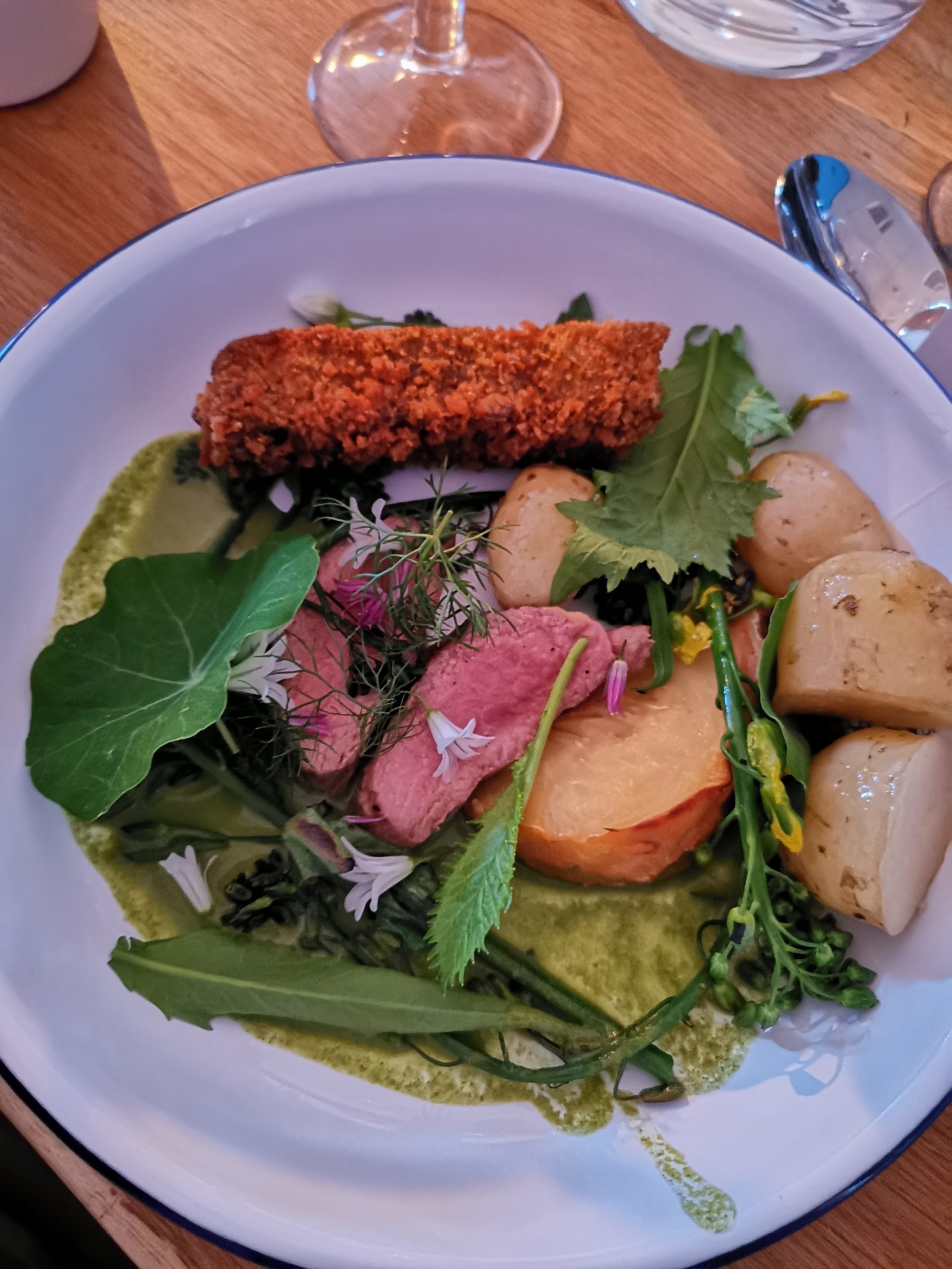 Onto the main course of Welsh lamb, served a luscious pink with a croqueta of slow cooked lamb inside too. Some fresh salad leaves, locally picked new potatoes with loads of butter and some extra greens. It tasted fresh, looked rustic and just as I would expect out of the River Cottage cookbook.

I enjoy vegetables, they just taste bland and dull when I cook them. Everything had it’s own bit of tender loving, yet not overpowering or overshadowing anything else on the plate. Seasoned to perfection, even though I thought there would be white ceramic tubs of Halen Mon within reach for everyone, we really didn’t need it.

We were sat / stood outside in the sunshine for the tasting of the gin and the canapes and it would have been lush to dine outside but it’s not quite summer in the evenings and the temperature tends to drop considerably, especially being right next to the water’s edge. With the logs being put on the burners outside, which was now churning out a decent heat, we were able to grab a chair, a glass of dessert wine and have a shmooze, whilst the dessert of stewed rhubarb, custard and crumble was handed out to very happy campers.

Thinking we were all done, after quite the feasting, a couple of wooden boards were handed out with gargantuan wedges of Welsh cheeses and a knife to do your worst. It was dark out there, but I think I would definitely have been caught shimmering out of the circle, cheese in tow to the nearest bush or rock, to polish it all off myself.

What an amazing evening we had, from start to finish. Everyone was so lovely not just the Halen Mon team but everyone we sat next to and had a chat with.

The food was outstanding. Everything was sources as local as possible, seasoned perfectly and you could taste the love shown to it. I will definitely be calling in to have tour around the salt production site and finishing with a bite to eat at Tide, the next time I’m up and on the island. 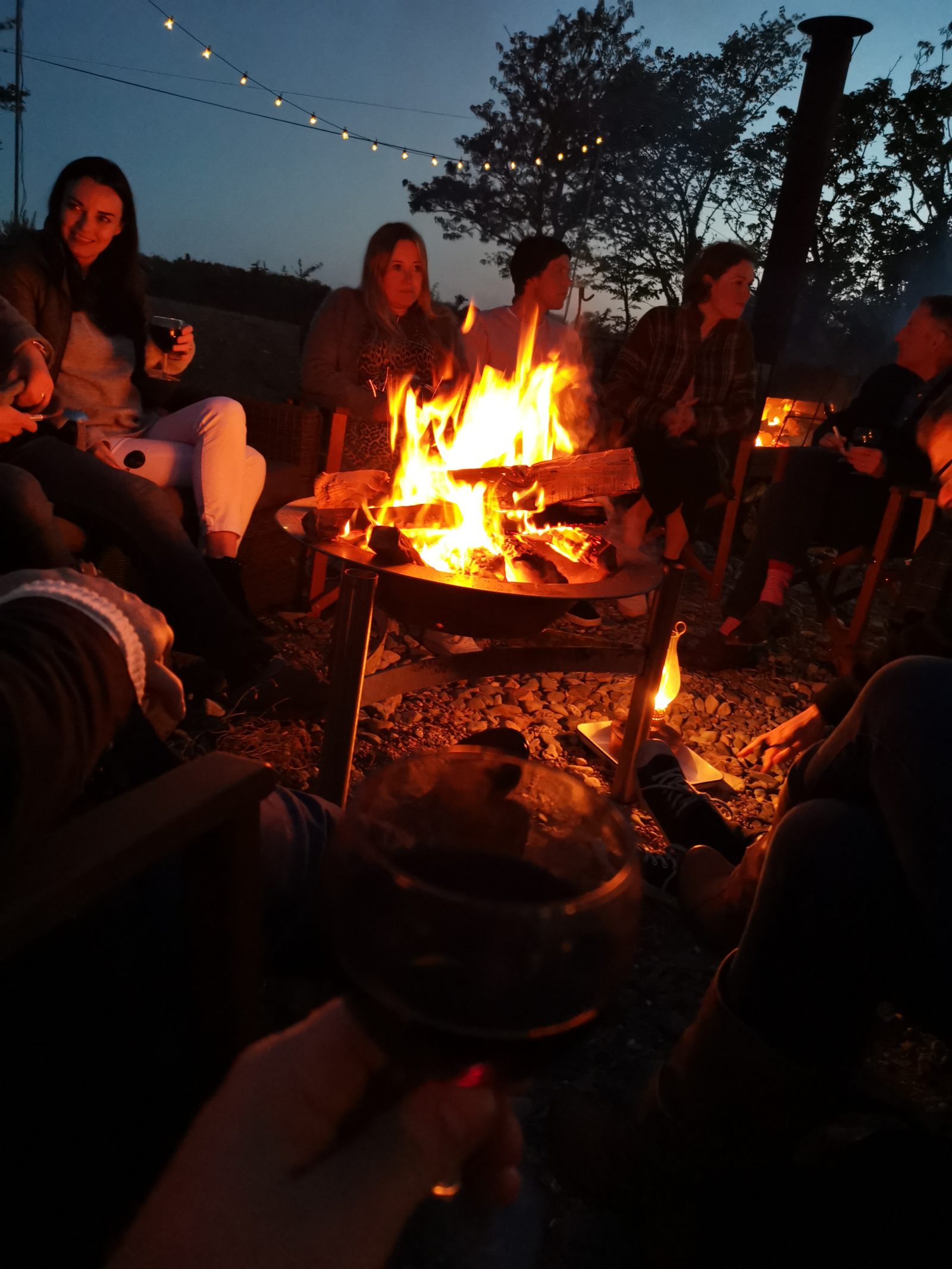 We bought our first Halen Mon ceramic salt cellar about 2 years ago at Waitrose in Menai Bridge and it takes pride of place in the kitchen and always in arms reach when we sit down for food.

We’ve also topped it up and bought a few other nicies from the range on Discover Delicious too including seaweed and salt mini pot, Bloody Mary Ketchup and my fav their Black Garlic Ketchup.

The gin was a lot better than I thought it was going to be. Not that I thought it would be bad but I couldn’t fault the end product. You can buy it from their website at around £33 or the other half was back up in Anglesey last week with work and popped in and bought one in the shop next to Tide for the same price. We will definitely be showcasing it at a future Cardiff Gin Club event.

The book “Do Sea Salt” can also be bought from their website and in the visitor centre shop.